Kwabena Agyepong Is Being Sabotaged 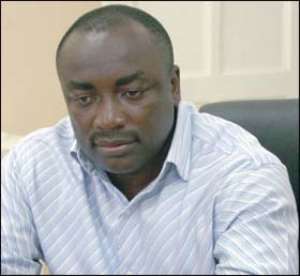 Kwabena Agyepong since his election has committed the most schoolboy of administrative goofs.

He has been flagged not once, not twice, but more than thrice already trying to either bypass the constitution of the Party or his other Executives in decision making.

He has shown an alarming penchant for autocracy. And showing signs suggestive of the fact that the image he presented to delegates at Tamale was nothing but a façade.

His conduct since his election compared to the promises and assurances he gave, has been -to be charitable- curious.

Two months ago Kwabena Agyepong purported to dismiss, with the consent and approval of the National Chairman, his co-worker at the National Secretariat, the Party's Director of Finance and Administration.

According to the uncontroverted facts, Mr. Opare-Hammond was just called into Mr. Agyepong's office and told he had been sacked. Yes, just like that.

That coup-like dismissal was challenged by many, myself included, on the grounds that it was unconstitutional. It clearly violated both law and common sense.

The common sense being that when a group appoints a person, only a group can dismiss that person.

Many patriots, however, were eager to forgive Mr. Agyepong and rationalize away that unfortunate incident on the ground that the General Secretary was still young in office.

I, however, saw it as a foreshadow of coming events. For me it was a telling sign of what was to come.

I couldn't have been more right for shortly afterwards, the General Secretary purported to dismiss the entire security workforce at the Party.

Expectedly, this ended in another embarrassing fiasco. Not just that, it turned violent and eventually the Police had to be called in.

The reason that the General Secretary's boys gave was that he didn't trust the old security guards.

His apprentice spin-doctor 'OPK', first denied that anything was happening at the Party's Office, then changed his story to say that the guards were just going to receive training and finally ended up having to eat the humble pie that the General Secretary had goofed.

Between those two incidents there were several other attempts, mostly with the complicity of the Party's Chairman, to undermine the National Council; a grand conspiracy involving the two to have a delayed Congress for instance has been hatched and is still actively being pursued.

All to what ends? Maybe Alan Kyeremanteng can tell.

Being frustrated so much albeit by the party's constitution, paranoid Mr. Agyepong now thinks there is a ostentatious plan TO SABOTAGE HIM.

But no, no one would want to sabotage him. In fact, if anyone had such thoughts they would abandon it because by his conduct, Kwabena Agyepong has made the biggest and most dangerous enemy within the party; the Party's Constitution.

Yes, what is sabotaging the General Secretary is the Party's Constitution and his apparent lack of knowledge of it! That is Mr. Agyapong's demon and not any individual!

Mr Agyepong assumed office with the mistaken belief that a General Secretary can have his way with the party. That belief was well sold to his faithful who even as at now respond to even the most learned and considered objections to the excesses of Mr. Agyepong with the refrain 'he has the platform'.


Those shrilling calls might appeal to a village champion to beat his chest and misbehave; it might urge on a primary school class captain to think there is no other student in the class above him, but, a General Secretary of the New Patriotic Party must know better than to buy into such giddiness.

If Mr. Agyepong wants to succeed, he must grow out of that platform delusion. He does not have any platform. No one does. He must know his jurisdiction and understand that the NPP is a very decentralized entity when it comes to decision making. Power is not even at the executive level concentrated in the hands of one person.

Pleading what happened under previous administrations would not help him too. After all, he sponsored the views that eventually led to the reconstitution of a new National Council based on a strict adherence to the Party's Constitution.