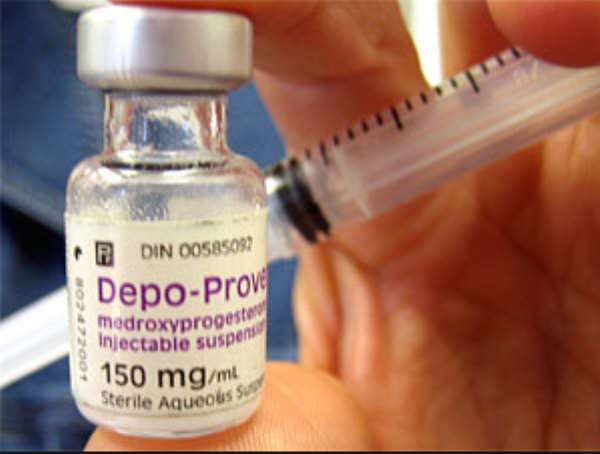 Contraception is a basic human right for all women as articulated in the Universal Declaration of Human Rights. Every girl and woman should have the right to choose what contraception method, when they want it and how they would like to plan their families or control their fertility.Importantly women should have the right to enjoy sex without the fear or risk of pregnancy.

The role of Governments/leaders is to ensure and support this human right for African women and girls including the assurance that the contraception methods made available to their citizens are safe. Depo-Provera or 'the injection' as is commonly referred to, is a common method of contraception widely used in Africa. Depo-Provera is a contraceptive injection that works by releasing progesterone slowly into the recipients system preventing ovulation.

There are significant concerns about the safety of Depo-Provera despite it relatively cheapness, easy to transport/access, can be used by women and girls discretely, and the many associated side effects. Marie Stopes International,a leader in family planning services internationally, cautions againstthe use of Depo-Provera because it may delay pregnancy for up to twelve months for women who may want to have a baby in the next year; theincrease risk in weight gain; and decrease in bone density. Further Depo-Provera provides no protection against Sexually Transmissible Infections (STIs) including HIV. It is known that STI and HIV disproportionately affect African women on the African continent.

Based on the evidence about Depo-Provera it is evident that the risks surpass the benefits. There are other cheaper forms of contraception in the market today that will provide similar/more benefits, at competitive or lower costs, with little risks and side effects to women and girls compared to Depo-Provera. Lilian Sepúlveda (2013), said:“Women have a fundamental right to decide if and when to have children … history has proven that even well-intentioned efforts to provide women with increased access to contraception can result in coercive practices if women's rights and empowerment are not at the center of such policies and programs”.

We the African diaspora are united in calling on African Leaders and Heads of Governments to ban the use of Depo-Provera on the African Continent. That Depo-Provera should NOT be used on our sisters, daughters, cousins, aunties and other. It's a basic human right.

The pharmaceutical Depo Provera belongs to a category of dangerous progesterone contraceptives, e.g. Norplant, which are restricted by the FDA in the United States with “Black Box Warnings”, and branded the “DDT of contraceptives” by human rights advocates, because they are highly toxic, have debilitating and lethal side-effects, and are also banned or restricted in Europe, India, Israel and the Middle East. Norplant was pulled from U.S. markets in 2002 after multimillion dollar settlements by Pfizer. However, Pfizer now avoids U.S. lawsuits by licensing Norplant to European corporation Bayer, and sells Norplant and DMPA to Africans and developing countries through institutional intermediaries such as the Population Counciland United States Agency for International Development(USAID). According to the Wall Street Journal, Pfizer through a partnership with Bill and Melinda Gates will earn approximately 36 billion dollars in new Depo Provera sales annually.

PFIZER & PLANNED PARENTHOOD
In 1998, the FDA sent a letter to Pfizer, the maker of Depo Provera, requesting an immediate halt to advertisements that misled women about risks and side effects of Depo Provera. However, Pfizer skillfully circumvents the FDA and continues this practice of misleading women about risks through intermediaries. For example, prominent Depo Provera distributer Planned Parenthood Federation of America (PPFA) directs target marketing to mainly Blacks (video) and Latinas (video) while concealing detailed data about Black Box warnings. Precise FDA labelling warnings that detail lethal side-effects and Black Box warnings are concealed or minimized by Planned Parenthood (click here for website). If White women are in fact responsible for majority of births in the United States, i.e., over 65% of U.S. citizen newborns, then deliberately targeting Blacks and Latinas is evocative of eugenic population control polices.

Congress should hold hearings to compel the U.S. Department of Justice (DOJ), Health and Human Service (HHS), Congress, and related agencies: U.S. Attorneys,FDA, FCPA enforcement, and HHS-OIG, to investigate and prosecute Pfizer and its institutional intermediaries for widespread fraud related to false claims, intimidation, collusion and, conspiracy to promote and distribute Depo Provera as an optimal and preferred contraceptive for women, especially Black women; while deliberately concealing and minimizing the debilitating and lethal side effects of Depo Provera. Furthermore, Pfizer's cyclical and patent criminal fraud is detailed in legal documents filed by HHS and DOJ in similar prosecutions of Pfizer for: 1) False claims violations (31 U.S.C. §§ 3729 – 3733) that include: off label claims, kickbacks, concealing lethal harm; 2) Foreign Corrupt Practices Act (15 U.S.C. §§ 78dd-1): bribing of foreign officials; and 3) Widespread corruption that resulted in a Corporate Integrity Agreement (CIA) between Pfizer and HHS-OIG, and a 2.3 billion dollar DOJ settlementfor criminal fraud.

In 2012, when Pfizer pled guilty to a felony and agreed to pay approximately $2.3 billion in fines for criminal fraud, it resulted in the second largest pharmaceutical fine in DOJ history. That same year Glaxo Smith Klinewas honored to pay $3 billion dollars, the largest pharmaceutical criminal fine, for fraudulently concealing and minimizing harm of lethal drugs that are detailed in this DOJ announcement and document filed in federal court.

For those aforementioned reasons, and other details discussed in this document, prosecutions and stringent informed consent protections/defunding of Depo Provera are required from the DOJ, HHS and Congress to protect African-Americans, Hispanics, vulnerable populations of low-income women, and children as young as 11 years old, targeted with Depo Provera/Sayana Press, in a marketing scheme that incorporates all the promotional patterns and elements related to Pfizer's cyclical and patent pharmaceutical fraud.

POINT BY POINT: Why Depo Provera (Sayana Press) is a Lethal Progesterone Contraceptive
(1) FDA Black-box warnings require that women be informed of significant bone density loss, not use Depo Provera for more than two years,and other warnings not to breastfeed. The FDA has a dedicated page online detailing Black Box warnings and lethal harm requiring counselling of patients before they are injected, according to federal labeling regulations under 21 CFR 201.57.

(2) Pfizer's own research data from clinical trials and information furnished to US physicians consistently demonstrate several debilitating side-effects, and indicate that even after discontinuing Depo Provera in adolescents [teens], mean bone mineral density loss at total hip and femoral neck did not fully recover by 5 years [see Clinical Studies (14.3)].

Yet, 11 year old African-American, Hispanic and African children, younger than Jennifer Gates (18 years) and Phoebe Gates (12 years old) are injected with Depo Provera, which is promoted as a safe drug by their mother, Melinda Gates. Meanwhile, Gates and USAID's partner, Pfizer rakes up to 36 billion dollars in new Depo Provera sales annually,according to the Wall Street Journal

(3) American Association for Cancer Research breast cancer study published by the NIH has findings that women who use Depo Provera double the risk of developing breast cancer.

(4) Bill and Melinda Gates Foundation's (BMFG) owns privately funded HIV/AIDS research with the NIH, published in the leading medical journal, The Lancet, recommends informing women with HIV/AIDS of the risk of injectables and to use alternative non-progesterone based contraceptives, because it exacerbates the rates of HIV/AIDS infections to their sexual partners. Underscoring the importance of this research is the fact that Dr. Renee Heffronand her research team funded by Gates and NIH did not succumb to pressure.

Heffron's findings published in Lancet directly threatened hundreds of millions of dollars invested by USAID, Gates and Pfizer, and another partnership with Becton Dickinson and PATH that led to the development of “self-injectableDepo Provera called Unijectand rebranded as Sayana Press in Africa. This “self-inject system”not approved by the FDA, deliberately circumvents FDA regulations that obligate health professionals to prescribe and administer Depo Provera, and give patients mandatory counselling information of Black Box warnings and other debilitating side-effects.

(6) In 1998, the FDA sent a letter to Pfizer, the maker of Depo Provera, requesting an immediate halt to advertisements that misled women about risks and side effects of Depo Provera. However, Pfizer deftly circumvents the FDA and continues this practice of misleading women about risk through intermediaries. For example, one of the largest Depo Provera distributers, Planned Parenthood Federation of America, directs target marketing to mainly Blacks and Latinas while concealing detailed data about Black Box warnings; however, White women are actually responsible for over 65% of U.S. citizen newborns—not Blacks or Latinos -- why are we targeted by PPFA?

(7) Furthermore, posted on Planned Parenthood's website (featuring a Black woman of course) is the off-label claim: “The shot [Depo Provera] can help prevent cancer of the lining of the uterus (page 2)”. Even if hypothetically true, a search of Depo Provera's FDA approval does not list the contraceptive Depo Provera (DMPA), as a cancer prevention drug. Therefore, those medical statements to consumers that require approval by the FDA are false-claims. Why does Planned Parenthood list unapproved off-label claims on websites, but not mandatory FDA Black Box warnings and lethal side effects?

(9) The United Nations World Health Organization (UN-WHO) knows that Depo Provera has an unintended consequence of, significantly increasing a woman's susceptibility to HIV/AIDS and all other sexually transmitted diseases (STDs) due to the fact that the progesterone in Depo Provera induces thinning of the vaginal epithelium. Therefore, women in high HIV infection regions in the U.S. and especially those in developing countries without access to comprehensive and proactive healthcare should not be injected with Depo Provera, because of increased susceptibility to HIV/AIDS and other STDs. Moreover, the UN-WHO has the cultural competency to know that women also living in high risk HIV communities may avoid using condoms to maintain their relationships with men who may be their sole financial providers.

(10) In spite of all that knowledge, soon after a Jan 31, 2012 to Feb 1, 2012 closed door meeting in Geneva, the UN-WHO endorsed the use of Depo Provera; and released a contrived eight-page Depo Provera Technical Statement, claiming there is no conclusive data about HIV infections. But, that was a bold lie because, the Rebecca Project has proof that at the Geneva meeting, World Health Organization officials were provided this document from page 37 of Chelsea Polis (USAID)/Kathryn Curtis' (CDC) reportthat clearly quantified 11 other independent studies that warned of HIV/AIDS and injectables (this document was leaked to Kwame Fosu of the Rebecca Project).

(12) USAID Administrator Dr. Rajiv Shah and Melinda Gates claim Depo Provera is the preferred choice for African women, when in fact “access to choice contraceptives”, is predetermined by virtually only promoting, Depo Provera and a brand of long-term dangerous progesterone product extensions that are injected or implanted: Sayana Press, Uniject, Norplant, and Jadelle, as the “optimal” choices. It should be noted that Dr. Rajiv Shah is a first generation American from India. Depo Provera was banned from all of India's social-welfare funded programs, because it was determined to be a lethal contraceptive. UNFPA also funds Planned Parenthood and Marie Stopes to promote Depo Provera/Sayana Press in Africa.

(14) A review of Johns Hopkins Bloomberg School of Public Health Depo Provera website, demonstrates that as a Pfizer intermediary serving vulnerable populations, Johns Hopkins deliberately conceals the plain “Black-Letter” FDA Black-Box warnings and minimizes other lethal side-effects. It is incredulous that a leading institution ignores to post FDA Black Box warnings on their website. Vulnerable populations are individuals with diminished autonomy, for example: children, employees, impoverished people, mentally incapacitated individuals, pregnant women, prisoners, students; they must be protected as a vulnerable class with stringent informed consent when administering drugs with lethal side effects or during recruitment for research.

(15) The Rebecca Project's Attorneys sent a letter to the Department of Justice to investigate and prosecute Pfizer; and are in the process of filing a Depo Provera civil lawsuit against Pfizer in the U.S. Separate lawsuits will be filed in Africa withPfizer, Planned Parenthood/Marie Stopes as defendants.

E/R: Teachers boycott class as unknown persons use faeces to...
13 minutes ago