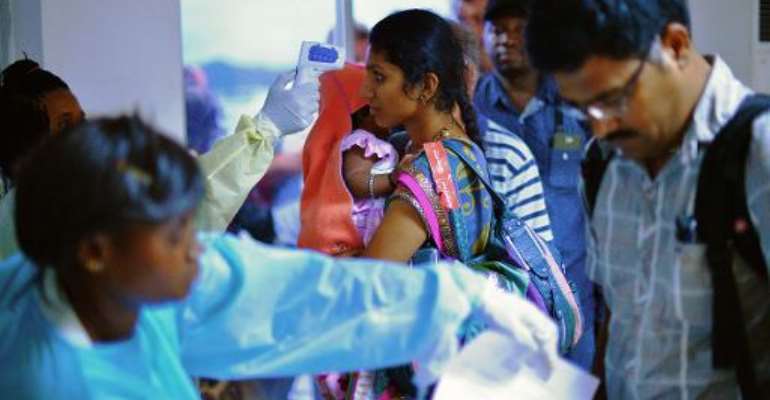 Sierra Leone medical clinical officers check on arriving passengers by taking their temperature on August 12, 2014 at the International Airport in Freetown. By Carl de Souza (AFP)

Freetown (AFP) - A second senior doctor in Sierra Leone was confirmed dead from Ebola on Wednesday as west Africa anxiously awaited the arrival of experimental drugs to tackle the deadliest-ever outbreak of the virus.

Sierre Leone's chief medical officer Brima Kargbo said Modupeh Cole, a senior physician in the capital Freetown, had been "instrumental in the fight against the Ebola virus".

Cole's death came only a fortnight after the country's only virologist and leading Ebola expert, Umar Khan, succumbed to the tropical disease.

Another of the worst-hit countries, Liberia, is scrambling to save two of its own infected doctors and hopes an experimental serum from the United States will arrive in time.

The presidency said Tuesday it had received approval from the US Food and Drug Administration for the use of a barely-tested ZMapp treatment that has shown positive early results.

The two infected doctors have given their written consent to try the drug, which will be delivered to the country within 48 hours. A third doctor has already died from the virus.

The World Health Organization declared Tuesday it was ethical to try largely untested treatments "in the special circumstances of this Ebola outbreak".

The company behind ZMapp said it had sent all its available supplies to the region following an outcry over the fact it had so far only been used on Westerners, but supplies are extremely limited.

Germany on Wednesday called on its nationals to leave the three worst-hit countries -- Guinea, Liberia and Sierra Leone -- although it said it was keeping its embassies open.

UN chief Ban Ki-moon on Tuesday announced plans to step up the global response while urging governments to "avoid panic and fear" over a preventable disease.

His comments came after Sierra Leone President Ernest Bai Koroma expressed his "utter dismay" at the "slow pace" of the international community in responding to the outbreak.

In Freetown, the tropical fever is the only topic of conversation.

"We are all scared because of the way Ebola is spreading but we are taking all the necessary precautions," says Waisu Gassama, 27, who works in the HIV department of the dilapidated, century-old Connaught Hospital.

Outside the hospital, soldiers say they have been drafted in to guard doctors and nurses, many of whom have been targeted by angry mobs blaming modern medicine for exacerbating the epidemic.

The epidemic, the worst since Ebola was first discovered four decades ago in what was then Zaire, has killed over 1,000 people since early this year, the WHO said.

West African regional bloc ECOWAS said one of its officials had died from the disease in Nigeria, taking the total number of deaths in the country to three.

Cases have so far been limited to Guinea, Liberia and Sierra Leone, which account for the bulk of victims, and Nigeria.

Terror has gripped the impoverished west African countries, with harrowing tales emerging of people being shunned by their villages as the virus fells those around them.

When AFP visited the Liberian village of Ballajah, some 150 kilometres (90 miles) from the capital Monrovia, 12-year-old Fatu Sherrif had been locked away with her mother's body without food and water for a week.

Her cries went unanswered as panicked residents fled the village when both her parents fell sick.

Fatu later died and her brother Barnie, 15, despite testing negative for Ebola, was left alone and hungry in an abandoned house.

"Nobody wants to come near me and they know -- people told them that I don't have Ebola," he told AFP.

Although hopes have been heaped on the ZMapp treatment, it exists in such small quantities that only a handful of victims are likely to get access in the short term.

Its effectiveness is also far from proven, having only previously been tested on monkeys.

It appears to have had a positive effect on two US aid workers infected in Liberia, but an elderly Spanish priest also infected in the country, died in a Madrid hospital Tuesday despite being treated with ZMapp.

There is currently no available cure or vaccine for Ebola, which the WHO has declared a global public health emergency, and the use of experimental drugs has stoked a fierce ethical debate.

While the stock of ZMapp in the US has been exhausted for now, WHO assistant director general Marie-Paule Kieny stressed there were other "potential therapies and vaccines... considered very serious alternatives" and that two possible vaccines were moving rapidly towards clinical trials.

She said plenty of drugs had been developed "to a point", but companies had not footed the bill for expensive clinical trials as the virus was "typically a disease of poor people in poor countries where there is no market".