Ghanaian Politicians Are Not IMANI's Visceral Opponents, Rather Pompous Academics And Some Professionals 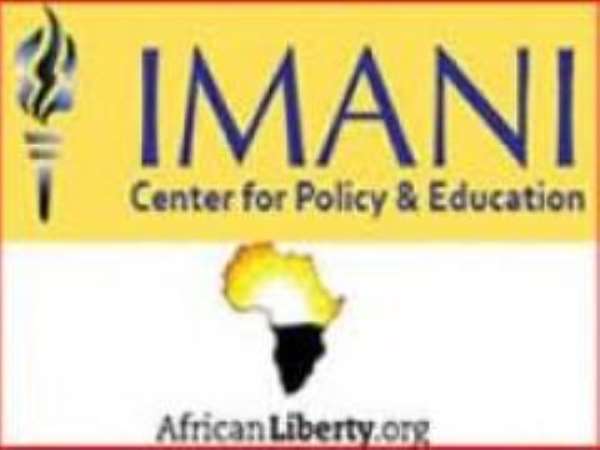 Today, I am on the issue of think-tanks and IMANI. It is true that IMANI has often clashed with government officials. And that in the Mills Administration, especially, this nearly got out of hand. It is natural that politicians will be uncomfortable about IMANI. The organisation boldly confronts their decision-making with fiery, opposing, arguments.

But, truth be told, IMANI's most visceral opponents are not really politicians. It is often professionals with an interest in current affairs or politics who resent IMANI the most. In the privacy of their offices and over canapés and drinks with friends, they express the most uncharitable views about IMANI's style and work.

The content of their criticism is often in three flavours: 1. They are not well-known academic experts in any important discipline; 2. What kind of think tank comments on such a broad range of unconnected issues; and 3. They only criticise all the time, and rarely involve themselves in long-term projects to help fix the issues they are criticising.

These attacks are mounted with gross contempt, and some spice it all with accusations of IMANI being under foreign control etc.

The fascinating thing is that these criticisms are often delivered with such pompous fervour that you would think the critics are themselves internationally recognised gurus in a dozen subjects Seeing, in fact, that they often are themselves not particularly distinguished, except in their own imagination, they will often prefix their attacks with a disclaimer: "as for me, I know I am not an expert...."

Let's be blunt. It is not the resentment that worries me. It is the STARK IGNORANCE masquerading as sophistication. The majority of the people who begrudge IMANI the distinction of 'think tank' status do not themselves have a clue what it means to be a 'think tank' as opposed to a specialist academic or research institute.

Some of the world's leading experts in the analysis of think tank behaviour around the world are at the University of Pennsylvania. That is what they spend their time doing, 'studying think tanks'. They collect data from across the world, and seek to better understand the philosophies that guide think tanks around the world, and how the global trends of their impact and influence are shaping. And every year, for many years now, they have ranked IMANI among the best performing think tanks in the world. Why?

Because the first thing ANYONE who has a clue about the work of think tanks know is that think tanks vary widely in their style and approach, and that the majority of think tanks are not actually research institutions that aim to publish original research in journals read by a handful of people, however prestigious.

The majority of think tanks aim to take on some of the many major stumbling blocks to society's *sound utilisation of knowledge for social progress*. They take the fight to the streets and the airwaves, and do not huddle with like-minded specialists in their ivory tower throwing jargon at problems. In fact, that is why the most activist academics tend to form think tanks or other activist organisations, away from the hallowed halls of academia.

Consider Noam Chomsky. Most people know him for his varied comments on international relations and policy, but his true academic home is in the obscure world of psycho-linguistics. That is where he found his respect among his PEERS. But the majority of people in his country and the world are NOT his peers. To influence beyond the narrow domain of his expertise he requires an activist framework.

The point therefore is that activism and public advocacy requires not narrow specialists employing narrow expertise to create knowledge in some limited area but the desire to compel society to confront the hard work of putting the broad knowledge that is widely available to the best use. The critical need for those who act on such a desire comes from the simple fact that society is known to act contrary to the best dictates of the best state of knowledge in that society. Experts abound where problems fester.

The question most people refuse to ask in this context is this: "who is paying the experts" and, thus, "whose interests are they serving". The answers to those questions explain the importance of 'think tanks', which are very often non-specialist, generalist, BUT STUDIOUS, organisations dedicated to public interest analysis and advocacy.

The true role of many think tanks is to prevent a technocratic dictatorship of self-seeking experts and bureaucrats in the employ of the political elite, and to serve as an accountability check on the system. Being non-specialist, think tankers can keep their eye on what matters from a political and public interest point of view.

They can balance the different opinions of experts based on their keen perception of conflicts of interest and bias. All it takes is a dedication to study. The will to spend significant amounts of time trawling through data and scenarios. A rigorous but general training in critical thinking and data analysis. And the attitude and commitment to keep at it, while other citizens are concentrating on their professions. The tools in the kit of a public interest advocate can be consistent across multiple scenarios, and may involve such tried and tested formulae as 'value for money', 'true cost tests', 'externality measurement', and 'public diplomacy'.

Frequently the same tools can be used to probe a wide range of subjects. It doesn't matter whether the matter in view is a sugar factory in Kommenda or a gas plant in Atuabo, public interest analysis, bias perception, conflict of interest, etc. apply ALL THE TIME. It is sad when people who have NEVER bothered to take their time to carefully analyse the actual impact of the work of think tanks, and have absolutely no understanding of how think tanks function around the world, make pompous, wholly ignorant, shallow, and frankly silly, comments about IMANI 'commenting on everything' etc, without even bothering to understand the methodology IMANI has adopted to keep itself relevant. Some even go to the extent of claiming that elsewhere ALL THINK TANKS specialise. I call it "chest-thumping cluelessness".

These self-admiring grandees clearly cannot, having become blinded by lazy arrogance masquerading as discernment, appear to fathom that IMANI does NOT aim to produce academic analysis as its primary focus. It's goal is to make it costly for the political elite to take the people for granted, and to do so mindful of the fact that very often the academic elite is also in bed with the business and political upper classes, and that, therefore, public interest activism cannot be a doctrinaire emphasis on narrow fields of specialisation (check the public boards and count the number of 'professors' collecting per diem from tottering and decaying public sector institutions).

When you look at the wide range of issues of public interest that IMANI contends with, it is clear that the underlying thread is the failure of democratic institutions to function due to elite capture. But we also see evidence of academic apathy or aphasia. Did we not have land economy and planning experts at KNUST when the STX debate was raging? Should the country have waited until a bunch of academics from KNUST, armed with fresh research grants from the EU, assessed the situation before the activism to compel rational analysis began? And was STX really a real estate matter, in the end? Who were the experts who should have been called upon to unravel the mess ahead of the deal? Experts in rent-seeking business men or struggling Korean conglomerates with a credit score problem?

There is a lot of shallowness that dresses itself as discernment in Ghana. The irony though is that very often those who call for depth and sophistication are themselves deeply ignorant about the complexity of the situation at hand, and their calls are motivated less by a desire for sound knowledge and more from sourness and bile. You cannot be sophisticated about something without spending a considerable amount of time studying it. And people frequently make dismissive comments in Ghana without an hour spent in reflection!

Because most issues are multi-disciplinary in nature, the harsh truth is that there is rarely a matter of public interest that can be fully addressed by expertise in a particular domain. Not when there are political implications. The world of academic peer review has few of the high stakes that political decision-making involves, and activism for public interest can therefore not be constrained by the logic of academia.

Bright Simons is affiliated with IMANI and the founder of mobile-based anti-counterfeiting technology mPedigree.net

“Ghana is a prime, ripe destination for doing business” – Ak...
30 minutes ago