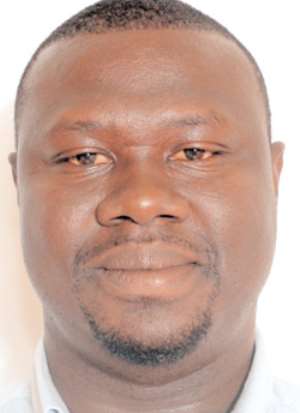 I must, however, hasten to add that my friend has given me the assurance that adequate measures have been put in place at the borders and the wedding grounds to ensure the safety of all. Indeed, a cousin who just returned from Anagoland has corroborated the fact that the authorities in Anagoland have heightened health checks at the various borders. So what do you suggest I do?

My grandmum has already given me her opinion on the matter. She called to calm my fears when she got to know I was scared of travelling to Anagoland because of the Ebola outbreak. Her prescription was very simple: I put a cup of salt in a bucket of water every time I take a bath. According to her, the virus is incapable of infecting a person who baths with salty water. A laughable prescription from a clueless old lady, isn't it?

The word clueless brings to mind Asomdwekrom's readiness to combat the deadly outbreak. From all intents and purposes, this country seems not ready for the deadly outbreak. As other countries are feverishly increasing precautions to contain the deadly outbreak, our clueless officials think it is business as usual. Reports reaching my 'konkonsaic' ears say 4 suspected Ebola cases have been identified at the Nsawam Hospital. With the threat from some doctors to run from their hospitals faster than Usain Bolt, I shudder to think what would happen in this country should the test come out positive. Kweh, ebe ye pensoo!

President Baloney was in the US last week. He thought he was going to cool off for a while; but how wrong he was. He was greeted by a hostile group of Asomdwekromanians who came out to vent their frustrations and disapproval at the way Mr. Baloney was handling affairs back home. The demonstrators were as vociferous as they were appalled by happenings here in Asomdwekrom. Who wouldn't be?

I listened to one of the leaders of the group on BBC and could not help but share their view point. The man's tone said it all. He accused Mr. Baloney and his cohort of eating the meat to the bone and refusing to give the masses the bone to at least savour the marrow. Yet they find ways to get more meat to chew, leaving the populace with nothing. Very disgusting, isn't it?

Unlike Mr. Baloney, Madam I-Know-It-All was not able to travel to the US. Why? She was said to have been banned from entering the United States for allegedly threatening the life of an American citizen. As such, the Americans see her as a threat to their national security. Other stories making the rounds point to the fact that she had become the first victim of the newly introduced policy of the US to deny corrupt African officials entry into their country.

You see, I'm not a fan of Madam I-Know-It-All. I don't even like the way she does her politics. I, however, doubt if she is a threat to American security. I know she can hurt a fly, but certainly not a human being. I hope she has learnt her lessons. As for the story about corruption, I can't vouch for her because she is a staunch supporter of the 'create, loot and share policy'.

Have you heard the news, Abusuapanin? Our beloved homeland is once again falling on the International Monetary Fund (IMF) for a bailout. And you know what that means, don't you?

I'm not an economist, and I don't pretend to be one. But even in my ignorance, I know that going back to the IMF comes with some challenges. One thing the IMF is famously known for is its love for 'conditionalities'. And these 'conditionalities', most often, worsen the plight of the suffering masses. One IMF condition I've heard many times is 'full-cost-recovery' on utilities such as water and electricity. With the levels of suffering already very high, you can but imagine what will happen when the 'full-cost-recovery' policy is activated.

The Commonwealth Games hosted by Scotland are over and our beloved motherland managed to win only two bronze medals. Many have blamed the poor performance on our over-reliance on football to the neglect of the so-called lesser known sports. The bloke who won the medal in judo, for instance, is said to have financed himself, with little or no help from the country. Despite contributing next to nothing to the victory, our Sports Minister gleefully posed for the cameras with the bronze medalist. His actions amply prove the axiom, 'success has many parents.'

Meanwhile, the Black Princesses are in Canada for the ongoing U-20 women's tournament. Just like Black Stars, they did not receive their qualification bonuses before the tournament. They have now played two matches. Would they emulate their male counterparts and threaten not to play the third match until they receive their cowries? Would there be a re-enactment of the Sulley Muntari Kung fu kick saga? I hope not; because the shame would be too great for this nation to bear.