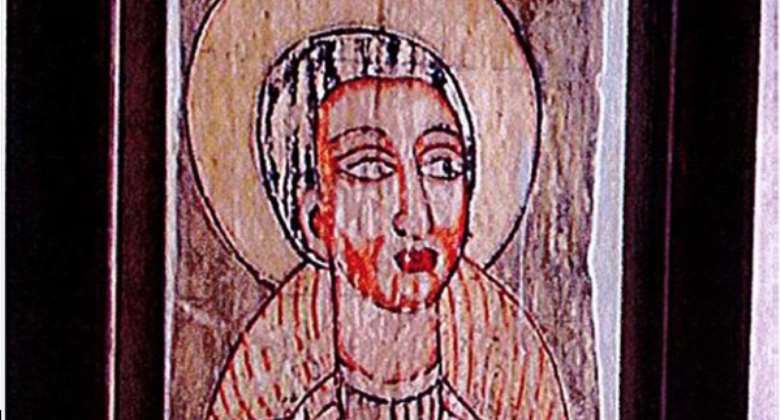 We read with great interest and attention a report entitled “Stolen Ethiopian Saint John Turns Up at Paris Auction” which was published by the Museum Security Network and other websites. (1)

The report states that a 17th century Ethiopian painting representing Saint John that had been stolen from the Musée de l'Homme, Paris, in 1989 turned up at an auction at Drouot, Paris.

According to the report, the painting had been in an Ethiopian Coptic Christian church, Abba Antonios, in Gondar, former capital of Ethiopia but was, with eleven others, collected in 1932 by the French ethnologist, Marcel Griaule during the Dakar-Djibouti Expedition (1931-33). Griaule had been able to persuade the church authorities that the Abba Antonios church was not suitable for these paintings and obtained from the local ecclesiastical authorities the permission to replace the original paintings with copies supplied by the artist of the French mission.

According to the report, the Ethiopian Foreign Ministry had complained about the removal but the Emperor had decided in favour of the French.

I was very uneasy with the report as presented. It seemed unspecific, referring to the emperor at that time, without giving the name of the emperor who was Haile Selassie. I got more suspicious as I read that the recovered work with eleven others had been acquired by Marcel Griaule during the notorious Dakar-Djibouti Expedition. Readers will recall that this rapacious mission went through the former French colonies taking, looting, stealing and seizing artefacts it thought useful for understanding those countries and their cultures, armed with the authority of a French government decree.

The methods used by this expedition have been detailed by the secretary-archivist of the mission, Michel Leiris in his fundamental book, Afrique Fantôme. (2) Members of the expedition did not shrink from using bribery, intimidation, corruption, blackmail, threats, undue pressure and plain stealing in obtaining objects they desired.(3) Michel Leiris wrote in his dairy of the expedition:

12 November
“Yesterday, we were refused with shock several statuettes which were used to cause rainfall, as well as a statuette with raised arms, found in a sanctuary.

Taking away these objects would have been like taking away the life of the country, said a young man who, even though had been in the army, had remained faithful to his customs, almost crying at the thought of the disasters that our impious gesture would have provoked, and opposing our evil design with all his strength, had alerted the old men.

Feeling like pirates: saying good-bye this morning to these affectionate old men, happy that we had spared them a disaster, we kept an eye on the huge green umbrella which was normally used to protect us but was today carefully bound.

There was a strange bulge looking like the beak of a pelican: it contained the famous statuette with raised arms which I had myself stolen at the foot of the earth mound which served as its altar. I first hid it in my shirt… and then I put it in the umbrella… pretending to urinate in order to divert attention.

This evening, at Touyogou, where we are camping at a public place, my chest is full of earth:my shirt served again as a hiding place for a kind of double edged blade, as we left the cave of masks of this village.” (4)

Anyone buying such a piece of work in Paris would know where to look for help if they were not sure of the origin of the work and its history. The museum is, of course, not very interested in a general discussion on the origin and history of any of its works since this would involve discussing the sources of the works from the Musée de l'Homme and the Musée des Arts d'Afrique et de l'Oceanie which are largely due to colonial plunder and deceit.

Made curious by the vague and very general reports and the mention of the notorious Dakar-Djibouti Expedition which brought some 3500 looted/stolen artefacts including 70 skulls from Africa to France, I decided to read a little more for I had the impression that there was more in this matter than meets the eye.

I consulted Afrique Fantðme by Michel Leiris. To my surprise, Leiris who is usually prolific about the itinerary and activities of the expedition, giving details about whom the group met and what precisely was taken, was not very forthcoming this time. Commenting on the account of Leiris of the activities of the mission's acquisition of objects at Gondar, Hélène Joubert, Senior Official responsible for the African section in the Musée du Quai Branly writes;

'The acquisitions in the region of Godsr in mid-July are shrouded in mystery.'' (5) But what Leiris wrote was enough to convince that the group did not hesitate to resort to its usual unorthodox methods of intimidation and deception. (6)

The corruption used by the Dakar-Djibouti Expedition comes out clearly in a passage from Leiris in which he writes that villagers who had wanted to help in removing the canvases from the church did not turn up; no doubt instructed by a chief who had not received the bribe he had expected. (7)

The expedition seemed to have favoured most of the time deception and dissimulation; Marcel Griaule and Roux packed the painting like ordinary materials and were decided to show only part of their loot to customs. (8)

Dissimulation is obviously, the preferred method of the French expedition. Michel Leiris wrote that the group had spent a whole morning packing items in such a way that custom officials may not discover the paintings and other items they had in their bags. (9)

The conduct and acts of the expedition as described by Michel Leiris do not reflect the conduct of persons who had received permission from the local authorities and the Emperor to carry away religious paintings. Why should they dissimulate the paintings at customs? Would it not have been logical and natural to expect them to tell all who wanted to know that they had permission from the local authorities and ecclesiastical authorities as well as from the Emperor to take them away? The overall impression one gets from the account of Michel Leiris is that of a marauding looting party of scholars.

I looked at the interesting book of Claire Bose-Tiessé and Anaïs Wion,

According to the authors, the expedition's artist, Gaston Loius Roux, demonstrated to the local church authorities the resistance to rain of the oil painting he had done by throwing water on the work whereupon the churchmen agreed to the expedition taking down all the old paintings and replacing them with new paintings by the artist.

When the expedition tried to do the same at another church, there was resistance and the matter was reported to the governor of the province and the Emperor. However serious political problems in autumn 1932 pushed the matter to the background and thus there was no decision from either the governor or the Emperor that would have allowed us to assess how far the expedition was authorized to remove the old religious paintings that had been in the church for centuries. (11)

We also looked at Éthiopie Millinaire; Préhistoire et Art Religieux , catalogue of an exhibition in 1974 with some pages on the paintings from Abba Antonios church. The issue of authorization is not discussed in the catalogue but the authors state that if the Dakar-Djibouti Expedition had not taken those paintings away, they would have been destroyed. (12) This is of course the classic defence of many Westerners when discussing looted artefacts but this does not justify illegal acquisition of artefacts. In an article entitled ''Conjuring tricks'' Clementine Deliss describes the tricks used by the expedition to intimidate and pressure the local clergy. The author states that Griaule secured the deal to remove the old paintings and replace them with new ones by threatening the clergyman with imprisonment. (13)

So it does not seem that any political authority and certainly not Emperor Haile Selassie gave any authorization for removal of religious paintings. But where did the Figaro article, translated into English and reproduced at various websites, get the notion that the Emperor at that time sided with the French against his own Ministry of Foreign Affairs? (14)

In view of what has been said above, it would be enlightening to receive more precise information on the following;

1. How did the French expedition manage to persuade the local church and the ecclesiastical authorities to allow them to take away 12 canvas paintings of the saints, 60 square meters of religious material that had been in the church for hundreds of years and replace them with copies made by a member of the expedition?

2. How did the French expedition manage to have the Emperor of that time, as the report puts it, back the French against his Foreign Ministry that was opposed to the removal of religious paintings from the Coptic Christian church?

3. Did the Musée de l'Homme advertise widely the loss of the painting in 1989

before the establishment of the Musée de Quai Branly in 2006?

4. Has anyone seen a written authorization of Emperor Haile Selassie or his representative to the expedition? Ethiopians were used to writing long before many other nations and by 1932 most authorities would issue such important decisions in writing, to be shown where necessary.

5. Has anyone thought of returning the original canvas painting of Saint John as well as the other 11 paintings to Ethiopia as requested by several United Nations and UNESCO resolutions? (15)

https://www.facebook.com
www.anonymousswisscollector.com
www.diretube.com
www.addistar.com
2. Gallimard, Paris 1934. Another edition of Afrique Fantôme may be found in Michel Leiris, Miroir de l'Afrique, with other writings of Leiris edited and annotated by Jean Jamin in 1996.

3. K. Opoku ''Benin to Quai Branly: A Museum for the Arts of Others or for the Stolen Arts of the Others?'

http://www.museum-security.org
4. Afrique Fantôme, p. 156. Translations from the French are by K. Opoku.