NPP committed more crimes than any other govt - JJ 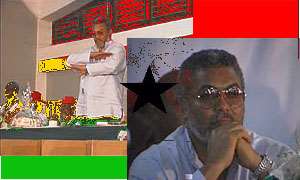 God brought them to power to teach Ghanaians a lesson -ET Accra, May 31, GNA - Flight Lieutenant Jerry John Rawlings, former President and founder of the National Democratic Congress (NDC) on Sunday called on the Party's supporters to be firm and resolute in their actions to ensure victory in the upcoming elections. He said NDC members must be vigilant at the various polling stations and guard against any attempt by the New Patriotic party (NPP) to rig the elections. Former President Rawlings was speaking at the launch of the NDC's Identity Card for members in the Kpeshie Gonno-Adenta Constituency at Adenta, near Accra. The Kpeshie Gonno-Adenta area is a new constituency, which has been carved out of Ashaiman as part of the new 30 districts created by the Electoral Commission (EC). Its boundaries span Adjiringano, Ashalley Botwe, Adenta up to Maalidzor on the Dodowa road. The former President, who received a rousing welcome as he entered the durbar grounds from the teeming crowd of NDC activists and sympathizers clad in the Party's colours, slammed the NPP government for "the hardships that its policies have brought to the mass of the people." He said the NPP government rode to power on a pack of lies, promising the people so many things and that up to now it has not been able to deliver any of them. He said within the past three-and-half years that the NPP government had been in power, "they have committed more crimes than any other government in the history of this country." The founder of the NDC also accused the NPP of trying to use unconventional means to win the December polls by creating shortages in the supply of electoral materials in the areas considered to be the stronghold of the NDC. He called on supporters to work assiduously to spread the message of the Party by organizing house-to-house campaign in their localities in order to reach the right people. Mr Enoch Teye Mensah, Member of Parliament for Ningo Prampram, called on the Party Executive in the new Constituency to select dedicated agents to man the various polling stations to prevent their opponents from rigging the ballot. He said President Kufuor and his NPP government have failed the people by not keeping faith with them. "They are confused people, God only brought them to power to teach us Ghanaians a lesson." Mr Mensah urged the Party's supporters to turn out in their numbers during the photo-taking exercise in the Greater Accra region and also at the December elections to ensure total victory for the NDC. "If all our people turn out, there is no way that the NPP would beat us." Mr Baba Abdullah, Chairman of the Kpeshie Gonno-Adenta Constituency of the NDC, said the Identity Cards would enable the Party evaluate its strength in the constituency. He also appealed to the National Executive of the Party to support the Constituency with some logistics because it was new. Other speakers at the function were Dr Nii Josiah Aryeh, General Secretary of the Party, Mr Samuel Ofosu-Ampofo, National Organiser and Mr Eddy Palmer, former Greater Accra Chairman. The first three copies of the ID cards were auctioned for one million cedis, 100,000 cedis and 50,000 cedis, respectively. 31 May 04