'When Bacteria And Virus Can Work So Well Together, Why Can't We?' 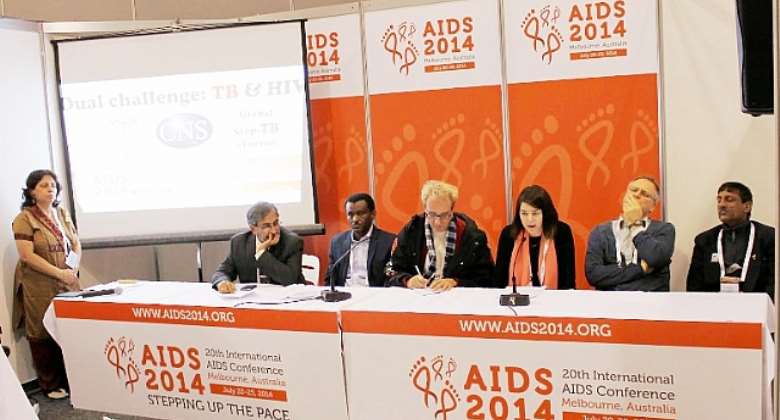 Setting the pace for the press conference, Dr IS Gilada, President, AIDS Society of India, emphasized that collaborative activities between national TB and HIV programmes can help maximise strengthen public health outcomes. He said if HIV programmes do not pay adequate attention to TB, or TB programmes ignore HIV, then the progress made in responding to HIV and TB gets threatened.


Dr. Gilada was a panelist at a press conference on "Dual Challenge: Tuberculosis and HIV" at the 20th International AIDS Conference (AIDS 2014) organized by AIDS Society of India, Citizen News Service (CNS) and the Global Stop-TB eForum.

Dr Gilada added that out of the 1.3 million TB deaths in 2012, 320,000 were attributed to HIV-associated TB. Half of these deaths were in women. This makes TB the leading killer of people with living HIV (PLHIV), and is responsible for about 20% of deaths in PLHIV. At least one third of the 35.3 million PLHIV worldwide are infected with latent TB.

According to the World Health Organization (WHO), people living with HIV are 30 times more likely to develop TB. An estimated 1.1 million people in 2012 were infected with both TB and HIV.

Dr KS Sachdeva, Additional Director General, Central TB Division, Ministry of Health and Family Welfare, Government of India, said to Citizen News Service (CNS): "The challenge confronting TB-HIV collaborative activities is the vast geographical diversity of India, the scale of the population which has to be reached, socio-cultural diversity and budgetary requirements to meet these challenges. The other challenge in India is that TB and HIV are administratively being dealt with by two separate departments: There is a separate department for AIDS control and TB activities come under the department of health.

Similarly all people at HIV testing and counselling centres, antiretroviral therapy centres are being counselled and screened for TB symptoms. Those people who are positive for any one of four symptoms for TB are offered TB test appropriate to their symptom. If they are tested positive for TB they are linked appropriately for TB treatment under the DOTS therapy."

Almost 90% of such patients were diagnosed and thus reducing the potential of co-morbidity, and improving the outcome and quality of life in such patients. Now as a policy TB programmme has prioritized testing of all HIV positive cases of presumptive TB, preferably through the fast track mode of TB molecular diagnostic methods (such as GeneXpert MTB/Rif). TB HIV collaborative activities have proved to be very beneficial for both the programmes and is improving the patient outcomes in both the TB settings as well as the HIV care settings."

TB incidence is coming down globally except for African and eastern European regions, and the Millennium Development Goals (MDGs) of halving new TB infections by 2015 as compared to 1990 are likely to be met. Dr Haileyesus Getahun, Coordinator (TB-HIV and community engagement) at the WHO Global Tuberculosis Programme was happy that implementation of TB strategies since 1995 onwards has succeeded in treating 56 million people with TB and averted the deaths of 20 million TB patients.

Another important component of this new strategy is to intensify research for better diagnostics, drugs and vaccines, without which it will be difficult to achieve the new ambitious targets. "Currently investment in TB research is coming down rather than increasing. We have to reach out to find new TB cases, not just drug sensitive ones but drug resistant ones as well, in key populations such as PLHIV. We have to innovate and go beyond the traditional TB control programmes and also look at social determinants, poverty reduction, and engagement of civil society organizations' said Dr Getahun.

Dr Mark Cotton, Director, Children's Infectious Disease Clinical Research Unit, University of Stellenbosch, South Africa, dwelt upon childhood TB. He said that the problems in dealing with TB-HIV co-infection in children is compounded due to a variety of reasons. Firstly, diagnosis of TB in children is difficult as it is not easy for them to produce sputum and also because TB in children is generally paucibacillary. Secondly, child-friendly formulations, especially in case of MDR-TB treatment are not available. The latest diagnostic tool GeneXpert MTB/Rif has definitely eased the situation to some extent. It can also detect rifampicin resistance which is a marker for MDR-TB.

Joanna Breitstein, Senior Director (Communications) at Global Alliance for TB Drug Development (TB Alliance) shared the exciting results of the phase-2b study of PaMZa new drug regimen for treatment of drug sensitive TB (DS-TB) as well as some forms of multi drug resistant TB (MDR-TB), which shows the promise to:

- Shorten the treatment time of both TB and especially MDR-TB

- Simplify treatment, eliminating 97% of the pills and all injections needed to complete MDR-TB therapy

- Reduce the cost of MDR-TB treatment by 90% or more in most regions.

Joanna informed that the next phase 3 study for this novel drug regimen called STAND (Shortening Treatments by Advancing Novel Drugs) is likely to begin by the end of 2014.

Dr Philippe Clevenbergh, Director of International Union Against Tuberculosis and Lung Disease (The Union) in Myanmar, is credited to be the man who, with his team and partners, made Integrated TB Care for Patients living with HIV (IHC) a reality on the ground in Myanmar. The IHC project has helped secure significant political commitment for collaborative TB/HIV activities, offered routine HIV counselling and testing for TB patients, increased TB screening among people living with HIV, provided standardised HIV treatment regimens and regular patient follow-up, improved recording and reporting for TB/HIV indicators, among other positive outcomes. Isoniazid Preventive Therapy (IPT) is an important intervention for preventing and reducing active TB in communities affected by HIV - preventing active TB can prevent millions of people from being infected in the community and in health care services.

The Union is also providing IPT since 2009 for PLHIV who do not have active TB disease, but only latent TB. The Union is also working in collaboration with National TB Programme, National AIDS Programme, Department of Health and the public sector in particular the township health centres.

The Union had launched PICTS (Programme to Increase Catchment of TB Suspects) in seven townships of Mandalay since 2012. PICTS is increasing the demand for and access to TB diagnosis, the number of TB cases diagnosed in project area, community knowledge about TB among other positive outcomes.

The Union also supports the facilitation of People Affected With TB Network (PAWTN). There is enough evidence to promote TB screening of people living with HIV and HIV screening of TB patients. Integrating these two, often vertical, services, not only increase case detection but also retention and adherence rates of people who are receiving care for the dual epidemic of TB and HIV, said Dr Philippe Clevenbergh.

No TB-HIV collaborative activities can be possible without active participation of the affected communities. Hari Singh, who is a cured TB survivor and a PLHIV leader in India, and a member of the TB-HIV committee of the Central TB Division, Ministry of Health and Family Welfare, shared the community perspective. According to him, "TB is a bigger problem than HIV. HIV may remain in my body for the rest of my life but is manageable, however TB infection can seriously make one ill. More new diagnostic tools like the GeneXpert MTB/Rif should be made available so that patients can get diagnosed quickly and accurately."

Hari Singh also spoke about the practical problems faced by people in adhering to TB treatment. The daily DOTS requires patients to go to the DOTS centre everyday to take their medicines and this interferes with their livelihood especially in case of daily-wage earners. Then again taking proper nutrition becomes a big problem for the poor patients. He appealed for governments to give social support benefits to TB patients like travel concession (to and fro between home and healthcare facility), nutritional support, rehabilitation, among others.

(The author is the Managing Editor of Citizen News Service - CNS. She is reporting from the XX International AIDS Conference (AIDS 2014) with support from the World Health Organization (WHO) Global Tuberculosis Programme. She is a J2J Fellow of National Press Foundation (NPF) USA and received her editing training in Singapore.