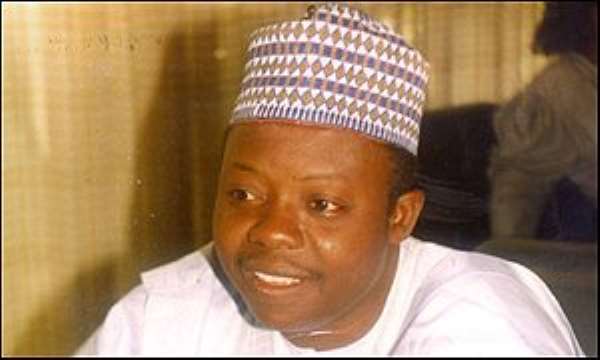 TROUBLE IS BREWING in the People's National Convention (PNC) party. Gye Nyame Concord can reveal that Mallam Ali Yusuf Isa, the man described recently by Dr Edward Narsigri Mahama as the best Organiser he ever had, has begun a major battle against his former flagbearer.

The one-time Minister for Youth and Sports, who recently walked out a free man from the Nsawam Medium Security Prisons after serving almost half of a four-year prison sentence, is also bent on stopping Dr Mahama and his supporters, including the maverick politician, Kofi Wayo, from going ahead with the scheduled PNC National Delegates Congress this Saturday, May 29.

And he is not alone in his mission to prevent the Congress from coming on at the La Trade Fair Centre, Accra, on Saturday.

Mallam Isa, a.k.a. “Ishah Allah” has in his camp the former Greater Accra Regional Chairman of the PNC, Alhaji Alhassan Mahamudu.

Both men petitioned the Electoral Commission (EC) late yesterday against going ahead to supervise the planned National Delegates Congress and urged the EC to instead advise Dr Mahama and their tecolleagues in the PNC from persisting in their ambition to hold the Congress.

The two are of the opinion that the planned congress violates the 1992 Constitution which demands that “a political party shall have branches in all the regions of Ghana” and be organised in not less than two-thirds of the districts in each region.

They also contend that a political party is required by law to declare public its revenue and assets and the source of those revenues and assets; something they suggest the PNC has failed to do.

The former PNC National Organiser and Greater Accra Regional Chairman also insist that their party has failed to hold any regional congress over the past five years and consequently has no regional executives in all the ten regions of the country.

“We wonder how national delegates' congress can be held without accredited delegates from the regions” they posited, urging the EC to refrain from giving its blessing to the proposed congress.

“We wish to inform and to remind you that, the above requirements have not been done and if done at all, have not been done properly”, the two said in their petition which reminded the EC of its constitutional mandate to educate PNC leaders on the illegality of holding the Congress.

But party officials indicated this week that they were ready for the Delegates' Congress, which is expected to amend portions of the party Constitution and to endorse a memorandum of understanding signed by the leadership last year for a grand coalition with the Great Consolidated People's Party (GCPP), EGLE Party and the National Reform Party.

Delegates are also expected to chose between Dr Edward Mahama, who has been the flagbearer of the party since 1996 and Kofi Wayo, a losing parliamentary candidate of the ruling New Patriotic Party (NPP) at the last general elections.

Whoever loses out between the two competitors is expected to become the running mate of the other in the December polls.

The positions expected to be filled in the National Executive are: Chairman; Vice Chairman; General Secretary; Treasurer; Women and Youth Organisers and Education Secretary.

Candidates for the National Vice Chairman are Mr Hassan Ayarigah, a Ghanaian businessman based in Germany and Mr J. C. Akai-Nattey, a founding member of the PNC.

Dr Somtim Tobigah and Alhaji Abdul Moomin, both leading members, are vying for the position of National Treasurer while Alhaji Mustapha Osman stands unopposed as the National Vice Treasurer.

The planned Congress is expected to be the last significant Congress to elect a flagbearer for Election 2004. The NPP has re-elected President John Agyekum Kufuor as its candidate for the third time running, while the National Democratic Congress (NDC) has also elected former Vice President, Professor John Evans Atta Mills for the second time.

The Convention People's Party (CPP) has Mr George Opersika Aggudey as its presidential candidate while the Great Consolidated Popular Party chose its founder Mr Dan Lartey for the second time to carry its mantle.

E/R: Police on manhunt for suspected robbers who escaped dur...
25 minutes ago