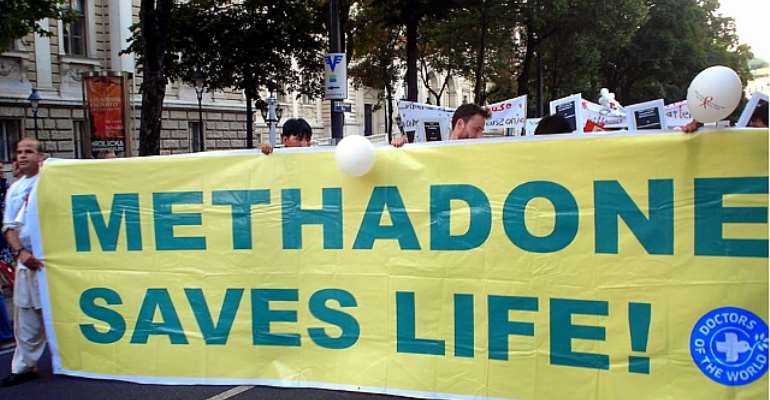 Vietnam is one of the countries in the world that has made remarkable progress over the last decade in not only making harm reduction and HIV services available and accessible for people who use drugs but also reforming laws for supportive health policies on the ground. Khuat Thi Hai Oanh who leads Centre for Supportive Community Development Initiatives (SCDI) in Viet Nam, was a plenary speaker at 20th International AIDS Conference (AIDS 2014) in Melbourne, Australia.

She said in 2003 Viet Nam had criminalizing laws related to drug use and compulsory drug dependence treatment of those using drugs. Being caught even once with illicit drugs meant being sanctioned and criminalized.

GAME CHANGER EXPERIENCE
Oanh met an Australian harm reduction advocate in 2003 who motivated her to lead the process of changing the scenario for PWUDs and HIV in Viet Nam. She realized that harm reduction is a pragmatic approach to keep people who use drugs (PWUDs) safe, healthy and be a part of the community. She saw that that harm reduction effectively prevents the transmission of HIV and other blood borne infections among PWUDs in Australia. People who have drug dependence can still live a healthy life. Oanh said that laws and social perceptions are very critical. 'These laws are made by human beings, so human beings can change them too!' said Oanh.

Laws and policies can either be critical barriers or critical enablers. Before 2003 harm reduction was illegal in Viet Nam. Distribution of clean needles was equated with promoting drug use. It was written in the Viet Nam's constitution that people who use drugs will be subjected to compulsory treatment.

No wonder when the first round of grant came from the Global Fund to fight AIDS, Tuberculosis and Malaria (The Global Fund), there was not a penny for harm reduction. But soon after, in 2003, British government stepped in and initiated a harm reduction initiative in Viet Nam which was not called 'harm reduction' since it was illegal in Viet Nam. So this initiative was referred to as HIV prevention work, which it truly was. 1000 clean needles were provided to an estimated 200,000 PWUDs in Viet Nam - a humble beginning but a positive start in the desired direction!

By 2004, Viet Nam was targeting to provide 100% clean needles for all PWUDs. In 2006, National Assembly of Viet Nam passed the HIV law and harm reduction was included (such as needle exchange programmes, etc) and opioid substitution therapy (OST) got legalized. 17,000 PWUDs were provided OSTs in 32 provinces and by end of the following year, 80,000 PWUDs were on OSTs. Most significantly drug use was decriminalized in Viet Nam in 2009 with revision of penal code. In 2013, national assembly of Viet Nam revised the law and removed compulsory drug dependence treatment for PWUDs.

DRUG OVERDOSE AND NALOXONE
Oanh poignantly remarked that 'Sometimes we forget, HIV is not the only killer. People who use drugs are 14 times more likely to die than people of the same age groups. Drug overdose kills 500 people every day according to the UNODC. But no one needs to die of drug overdose. Overdose can be reversed especially with naloxone. WHO is supporting community distribution of naloxone and developing guidelines and I hope countries will implement these guidelines effectively.'

HCV and DRUG USE
At least 60-80% PWUDs are infected with hepatitis C virus (HCV). 85% of them become chronically infected and one-third of those would develop liver cirrhosis or liver cancer, said Oanh. HCV treatment is effective as combination therapy for 12 weeks works with 90% effectiveness. 'But price of medicine kills the people, not HCV. Medicines do not have to be that expensive. A 12 weeks course of these drugs could be manufactured for USD 78-166 per person if methods of mass-producing generic drugs were applied (according to the research done by Hill A Cooke in 2014)' remarked Oanh.

OFTEN OVERLOOKED: TUBERCULOSIS AND DRUG USE
TB is among the top killers of PWUDs. TB is the leading cause of deaths among PLHIV of whom many are PWUDs. Regardless of HIV status PWUDs are many times more likely to get TB than others. If PWUDs get TB, then they are more likely to die of TB too. But the good news is that TB treatment works effectively among PWUDs as well.

'TB treatment needs to go hand-in-hand with OST, harm reduction and ART. We talk a lot about TB-HIV but we also need to talk about TB among people who use drugs' appealed Oanh.

Annabel Baddeley of the World Health Organization (WHO) Global Tuberculosis Programme agreed with Oanh's call to stop neglecting TB among PWUDs. Annabel said: "PWUDs are at a higher risk of TB regardless of their HIV status. They suffer from other comorbidities as well and also from massive stigma and discrimination even from the medical staff. All this makes the issue more complex. Comorbidities would mean that if services are not integrated they will have to approach a lot many services separatelyTB, HIV, Hepatitis and opiod substitution therapy if they are lucky enough to be opiod dependant. PWUDs are less aware of the problem/threat of TB. There has been an incredible movement for the need of treatment of viral hepatitis, but there is no massive indignation about people dying from TB as well. In Chennai there was a study of HIV negative PWUDs, which found that in them TB was the second-biggest cause of death after overdose. So awareness about TB is lacking in them even though they are more at risk of it. Imprisonment also impedes services."

Annabel further added: "At this conference consolidated guidelines are being released for key populations which addresses the critical enablers to promote access to healthcare services for key affected populations (KAPs). This would include proper laws to be enforced, anti discrimination, review of laws to ensure that drug use is not criminalized and also facilitation of services for opiod substitution. There are so many clauses in laws that make life so difficult. In some European countries one cannot get TB treatment unless one is admitted in the hospital and at the same time opiod substitution therapy is not allowed inside the hospital. So hospitalization without substitution therapy forces PWUDs to fore-go TB treatment. This is just not supportive. Then again we have forced treatment detention centres. All these issues are addressed in the consolidated guidelines for KAP for accessing integrated services for TB, HIV, and hepatitis for drug users. It basically promotes review of laws and change of laws that are necessary and then of course the enforcement of these laws, as well as treatment and human rights literacy. PWUDs and other KAPs need to know their rights so that they can demand and that would entail involvement of civil society to ensure that they are equal partners at the table. We cannot force anything without their equal and informed involvement."

Renovation Plan on Drug Treatment (2013) in Viet Nam recognizes drug dependence as a chronic health problem and calls for scaling down compulsory rehabilitation centres and aims to reduce the number of PWUDs in these centres from 63% in 2013 to 6% in 2020. 'This is not perfect but we are making progress' said Oanh.

HARM REDUCTION AND FUNDING SHIFTS
New ceiling on the Global Fund grants means harm reduction has to come along with other interventions. Funding to middle income countries has been reduced but that is where majority of PWUDs live. 99% of PWUDs live in middle income countries which are among the 15 priority countries identified by UNAIDS, with only 1% of them living in low-income countries. 'Funding gap in harm reduction is a93%' said Oanh. 'The excuse is always that there is not enough money but how come there is never shortage of money to do drug control?' questioned Oanh.

Australia, where Oanh was speaking at AIDS 2014, has been a good example to support harm reduction initiatives for PWUDs which have had profound public health impact. Australian Deputy High Commissioner to India, Bernard Philip said to Citizen News Service (CNS): 'Australia works with governments in our region to implement proven, cost-effective interventions which respond to the particular needs of countries. This includes advocacy for evidence-based programs targeted at key populations, including people who use injecting drugs. In many countries Australia has supported harm reduction: needle and syringe programs (NSP); methadone maintenance therapy (MMT); care support and treatment for people who inject drugs. These have been successful in increasing safe behaviours and averting HIV infections. In Indonesia in 2011, 87 per cent of people who inject drugs reported using sterile equipment. The decrease in sharing is likely to have contributed to declines in HIV infection rates in this population from 52.4 per cent in 2007 to 42.4 per cent in 2011. In Viet Nam close to 60 per cent of PWID have access to harm reduction services.'

The Preventing HIV transmission in drug users program (2007 to 2015, $9.7 million), a regional program that includes India and to which Australia has contributed, is fostering regional cooperation for mainstreaming HIV/AIDS concerns into drug demand reduction programs. The program has been instrumental in integrating critical HIV prevention and care services into Governments' own national domestically funded programs. For example, Bhutan has scaled up drug treatment services including six new centres bringing the total to nine the total number of government supported centres along with two (one male and one female) residential treatment centres. In India, the Australian Government supports harm reduction measures - such as opioid substitution therapy, and programs helping female partners of drug users - by funding community mobilisation efforts, and by building the capacity of local partners.'

Oanh ended her plenary with a remark that perhaps sends a strong message for supportive policy and legal framework for health and rights: 'I put on hold my medical practice for policy advocacy. Doctors save lives one at a time. Bad policies kills at a massive scale. Good policies save lives."

Shobha Shukla, Citizen News Service (CNS)
(The author is the Managing Editor of Citizen News Service - CNS. She is reporting from the XX International AIDS Conference (AIDS 2014) with support from the World Health Organization (WHO) Global Tuberculosis Programme. She is a J2J Fellow of National Press Foundation (NPF) USA and received her editing training in Singapore. She has earlier worked with State Planning Institute, UP and taught physics at India's prestigious Loreto Convent. She also co-authored and edited publications on gender justice, childhood TB, childhood pneumonia, Hepatitis C Virus and HIV, and MDR-TB. Email: [email protected], website: www.citizen-news.org).