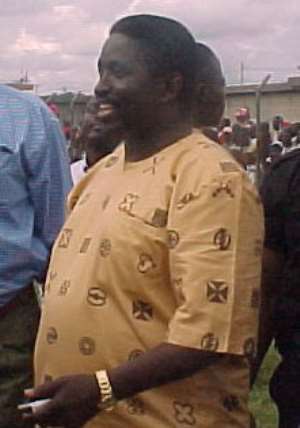 EFFAH DARTEY'S 'ANANSE' STORY ... All night prayers won day for NPP indeed IN WHAT appeared to be arming the students' branch of the University of Cape-Coast Tertiary Students Confederation of the New Patriotic Party (TESCON) with facts as foot soldiers to canvass for more votes for the party in the December elections, Captain Nkrabea Effah Dartey ended up in telling a tale.

In fact, it was at the inaugural ceremony of the newly elected executives of Tescon last Saturday when Effah Dartey, Member of Parliament (MP) for Berekum, told the students of a strange event that unfolded in the run-up to the 2000 elections.

According to him, in November during that period, a group of party members and some powerful reverend ministers engaged in all-night prayers for change in government for Ghana and all of a sudden, a certain whiteman who was in the midst of them opened his mouth and spoke tongues in Twi (a local dialect) saying, “me man Ghana, ma te mo su fre, me gye mo,” meaning God had listened to the cry of Ghanaians and he would save them.

He said after that all-night prayer, some of the party members inquired from the whiteman which part of the country came from and how long he had stayed in the country such that he could speak the local language with ease. According to him the whiteman replied that he spoke only English and nothing else.

This revelation from Effah Dartey drew much applause from the students, who urged him to tell them more.

The MP, who is also the deputy Minister of Local Government and Rural Development, described this event as a prophetic dream that came directly from God and linked it to the victory of the NPP in the last elections that saw them in governance.

Ironically, the MP could not tell whether such an event would occur this time round when all the political parties are preparing feverishly towards the December general elections.

The deputy minister, who is known in party circles as “Machoo,” then turned his attention to tickling the students with the alleged mess created by the National Democratic Congress Party (NDC).

He said the NDC looted the national coffers to the extent that, the reserves left at that period could only cater for the nation for only four weeks, stressing that the current reserves could last the country for four months.

The MP went on to say that a trip made by the former Vice President and NDC presidential flagbearer, Prof. John Evans Atta Mills, to Tema cost the nation ¢49 million, adding that ex-President Rawlings misruled the country during his 19-year tenure of office.

He swore that he would curse his star if NDC were able to win 30 parliamentary seats in this year's elections.

In another development, Isaac Edumadze, Central Regional Minister, admonished the students, cautioning them not to talk about inflation to the rural folk since they would not understand it.

He donated ¢2 million to Tescon.

On her part, Ms. Christine Churcher, MP for Cape-Coast, who inducted the officers into office, maintained that no group of persons could unseat the NPP administration, except God.