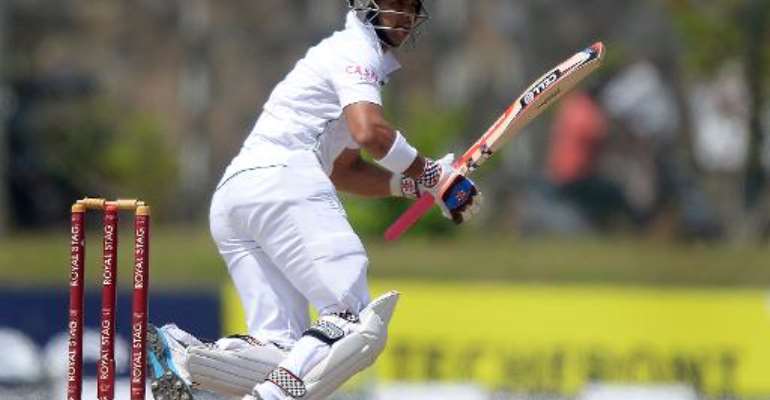 South Africa's JP Duminy during the second day of the opening Test match against Sri Lanka in Galle on July 17, 2014. By Lakruwan Wanniarachchi (AFP)

Galle (Sri Lanka) (AFP) - Rookie batsman Quinton de Kock hit a maiden half-century as South Africa moved to 331-7 at lunch on the second day of the first Test against Sri Lanka on Thursday.

De Kock, playing his second Test after making his debut in February, hit six fours in his promising 90-ball innings after South Africa resumed at their overnight score of 268-5.

Left-hander Jean-Paul Duminy was batting on 22 with Vernon Philander on three at the break.

It turned out to be a mixed session for the visitors who added 63 runs off 30 overs while losing two wickets in hot and humid conditions at the Galle International Stadium.

Sri Lanka did well to contain the Proteas, especially since they were one bowler short with a split webbing almost ruling out pace spearhead Shaminda Eranga from the rest of the game.

Eranga had bowled just nine overs when he hurt his bowling hand while fielding on day one. The injury required eight stitches, according to the Sri Lankan media officials.

South Africa lost an early wicket when nightwatchman Dale Steyn (three) was foxed by a straighter one from paceman Suranga Lakmal (3-50) that crashed onto his stumps.

De Kock, who scored a match-winning 128 in the recent third and final one-dayer against Sri Lanka in Hambantota, carried his form into the match, negotiating both the fast bowlers and spinners with ease.

A smashing cover-drive off slow bowler Dilruwan Perera (3-128) and another through point that raced to the boundary were the highlights of his innings.

But Perera earned his revenge when he sent back De Kock with a sharp turning delivery that the batsman edged in the slips to give Mahela Jayawardene his 198th catch.

Philander took 25 deliveries to get off the mark while Duminy also looked tentative at best during his 81-minute stay at the wicket.

The second and final Test will be played in Colombo from July 24-28.