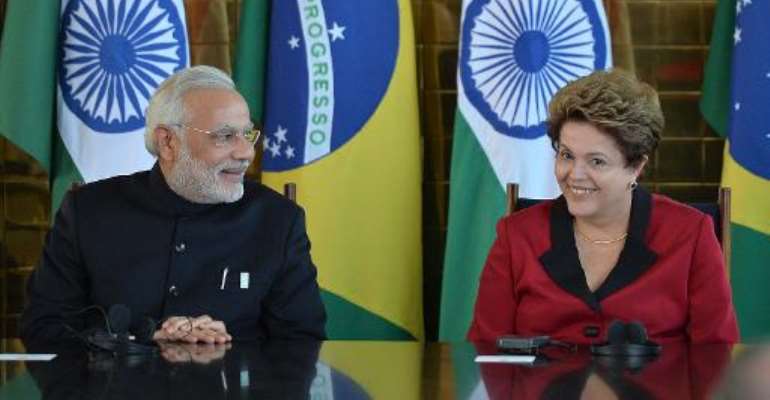 Brasília (AFP) - The BRICS group of emerging powers met Wednesday with South American presidents as they justified the creation of a development bank seen as an alternative to Western-dominated global financial organizations.

The gathering follows a BRICS-only summit Monday in the seaside city of Fortaleza, where the five nations agreed to create the $50 billion bank for infrastructure projects and a $100 billion crisis reserve fund described as a "mini-IMF."

Brazilian President Dilma Rousseff insisted that the BRICS were not seeking to distance themselves from the Washington-based International Monetary Fund.

"On the contrary, we wish to democratize it and make it as representative as possible," she told reporters following talks with Indian Prime Minister Narendra Modi before joining other leaders.

Emerging and developing nations have been frustrated at the slow pace of IMF reform aimed at giving them bigger voting rights within the institution.

While the BRICS bank and fund will benefit the group for now, Rousseff has left open the possibility of using them to aid other developing nations, notably debt-ridden Argentina.

Argentina is at risk of defaulting on $1.3 billion in debts after losing a US Supreme Court battle with hedge funds seen as "vultures" by Buenos Aires.

It could take two years, however, for the institutions to be operational because they have to be ratified by the legislatures of each BRICS nation, Brazilian officials say.

Chinese media hailed the creation of the BRICS bank, which will be based in Shanghai, blaming the West for flaws in the global financial system.

"The plans of the emerging-market bloc of BRICS to establish a development bank usher in a long-awaited and helpful alternative to the Western-dominated institutes in global finance," China's official Xinhua news agency said in an editorial.

The meetings represent a new push by Beijing to gain clout in a region traditionally seen as a US backyard.

China's massive purchases of commodities and exports of manufactured goods to the resource-rich region have boosted its two-way trade with Latin America to a total of $261.6 billion last year.

The meetings are also another opportunity for India's Modi to present himself to the world.

For Russian President Vladimir Putin, the talks give him a platform following his country's exclusion from the G8 group of industrialized nations over Moscow's annexation of Crimea from Ukraine.