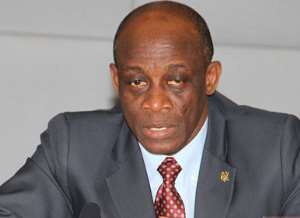 Seth Terkper
Finance Minister Seth Terkper will this Wednesday present to Parliament a midyear review of the 2014 budget.

Majority Leader Benjamin Kunbour announced this in Parliament last Friday as part of business for next week.

The review could see government revise its macro-economic targets set this year and announce some new policies to help stabilize the economy.

The current economic difficulties facing the country have affected efforts to raise the required revenue to match government's operations.

The country, for first three months of this year, failed to collect the 5.7 billion revenue target set out in the 2014 budget.

This challenge has been influenced by declining prices of Ghana's traditional export commodities like gold and cocoa,  and cut in funding by donor partners because of the country's middle income status and concerns with the management of the economy.

The challenge could see the finance minister also seek approval on how to spend some revenue coming in from other sectors of the economy.

Ghana Revenue Authority (GRA), for instance, has had difficulties in meeting targets set for the various tax types because of recent energy crises that hit the country.

A source close to the Authority told Joy Business that the recent tax hikes have not even helped in improving revenue mobilized from businesses.

Analysts see the review as one of the major interventions by government to help stabilize the country's economy.