Only FIFA will stop us; Govt unmoved by fears of political interference in GFA 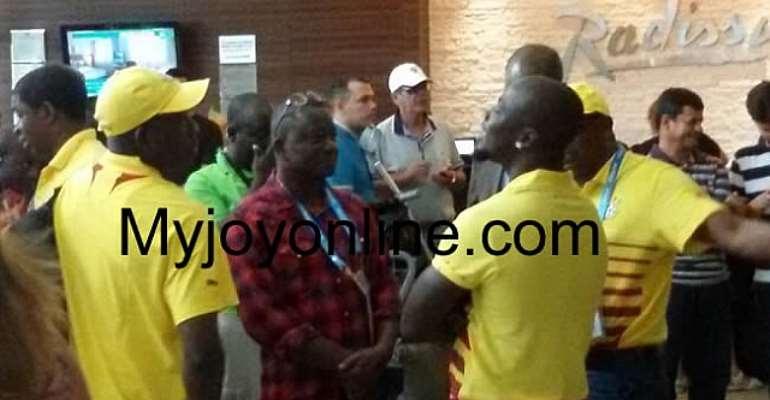 Government is unmoved by fears that setting up a commission of inquiry into Black Stars' dismal performance at the World Cup could incur the wrath of the football world governing body, FIFA.

President Mahama through Constitutional Instrument 82 announced the commission with the powers of the high court to probe all activities surrounding Ghana's participation at the World Cup including the management of the senior national team.

But private legal Practitioner, Kwame Akuffo fears some of the terms of reference are a clear violation of the FIFA rules.

FIFA boss, Sepp Blatter
According to FIFA regulations, “Article 13, par. 1 and article 17, par. 1 of the FIFA Statutes oblige member associations to manage their affairs independently and with no influence from third parties,”

Buttressing his point, the NPP sympathiser noted, the first two items on the terms of reference was problematic.

The particular terms of reference include;
a) To enquire into matters relating to Ghana's Black Stars team's preparation for the tournament and possible lapses therein which might have caused their early exit from the tournament.

b) To enquire into matters relating to the management of the Ghana Black Stars team and events in their camp during the tournament.

Kwame Akuffo told Joy News "I believe we have already encroached on FIFA protected territory" because "any attempt to investigate GFA as to how they prepare the Black Stars" constitutes political interference.

He pointed out that the GFA has executive committees and congress which can take up any such investigations.

Sports Mminister Mahama Ayariga on the other hand wants patience before any pronouncement of wrong doing.

"In matters like this it is appropriate to wait to hear from FIFA to hear if they have objections".

He believes FIFA will become stronger as a result of government's inquiry into the Black stars performance.

"When nations take an interest in the welfare of their national teams it inures to the benefit of FIFA because then nations build stronger teams and FIFA is able to offer the World more exciting tournaments".

Government has announced a three-man committee to investigate Ghana's shambolic World Cup performance in Brazil 2014. The committee has been upgraded into a commission to empower it in bringing persons to testify.

The other members of the committee are ace Sports Broadcaster and lawyer Moses Foh Amoaning and Sports enthusiast Kofi Anokye Darko.

The inquiry became necessary after Ghana's first round exit in the ongoing 2014 World Cup.

The exit crowned scandalous events off the field including an embarrassing airlifting of $3 million cash on a chartered jet, an act which made Ghana a subject of global ridicule.

There was also player agitation and a reported assault in which a player - Sulley Muntari - slapped a management member, Moses Parker.

The commission's terms of reference are:
a) To enquire into matters relating to Ghana's Black Stars team's preparation for the tournament and possible lapses therein which might have caused their early exit from the tournament.

b) To enquire into matters relating to the management of the Ghana Black Stars team and events in their camp during the tournament.

c. To inquire into matters relating to Ghana's treatment of Ghanaian football fans who were sent to support the Black Stars by the Ministry of Youth and Sports

e. Advise government on the financing of activities of the Senior National Team and other national teams; and

e. To inquire into all other related matters of public interest concerning the organization of Ghana's Black Stars' participation in the tournament.