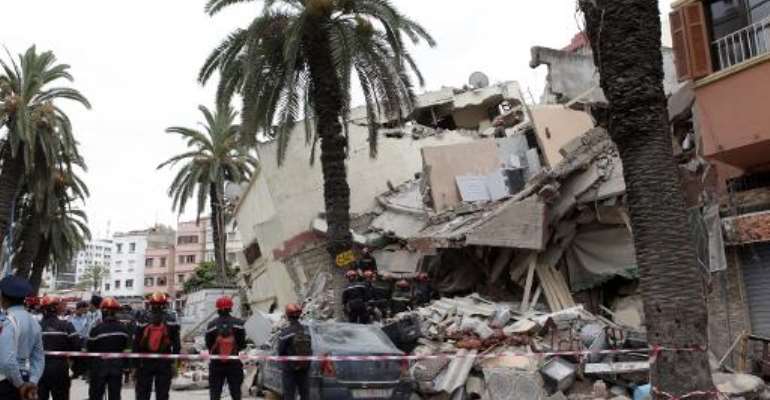 Moroccan rescuers inspect the rubble of a residential building that collapsed on July 11, 2014 in the city of Casablanca. By (AFP/File)

Casablanca (Morocco) (AFP) - The scene was like an earthquake, but residents say the collapse of three buildings last week in Casablanca that killed 23 people was the man-made result of greed and corruption.

As onlookers watched from behind emergency barriers surrounding the site on Monday, diggers cleared away the wreckage of the crumpled buildings in El-Hank district and inhabitants sifted through the rubble looking for personal belongings.

The day before, the toll from Friday's disaster jumped as 15 more bodies were found by the emergency services, on top of the eight already recovered, with another 55 people wounded.

There is still no confirmation as to why the three houses, which were built in the 1960s, collapsed.

But Mourad Nouisser, whose father owned one of them, is in no doubt that illegal building work played a key role.

"Houses in this area should not be more than three storeys high. But because of corruption, my father was able to build a fourth and then a fifth floor... he was greedy," said Nouisser, who no longer lived in the building.

"If it was dangerous, the authorities only had to refuse him permission. It's a crime," he added angrily, blaming both his father and those who he claims provided falsified documents.

Shortly before the house collapsed early on Friday morning, residents had noticed signs that it was subsiding, with some of the doors not closing properly and dust coming out of fresh cracks in the walls.

The body of Nouisser's father was one of the last to be pulled from the rubble on Monday.

Radouane Abdelali, an official with the emergency services, said there was very little chance of more bodies being found, because members of all the families living in the buildings had been accounted for.

"But that will not stop us from continuing our search at least until tomorrow night," he added.

Standing in front of the collapsed buildings, Abdelrahim el-Gouti said all the residents were to blame, for not having spoken out.

"All of us saw our neighbours adding extra floors, but none of us said anything."

Trapped in the building when it collapsed, he was able to call friends from his mobile phone, who came to his rescue quicker than the emergency services.

But Amal Maarouf, a Moroccan actress also buried under the concrete, was not so lucky.

Despite managing to speak by phone to several relatives on Friday after the disaster, she was found dead on Sunday morning next to her mother.

Moroccan newspapers have criticised the sluggish response by the security services -- whose efforts were interrupted several times due to a lack of equipment.

But they also pointed the finger of blame at the poorly-regulated housing sector, which condemns many of Casablanca's five million residents to live in hazardous accommodation, including in the city's sprawling slums.

After a string of similar accidents, the housing minister in 2012 said that between 4,000 and 7,000 buildings in Casablanca were at risk of collapse.

Despite the government announcing several initiatives to renovate buildings in danger, the problem persists.

"Why does permission to build one or two-storey houses so often lead to the construction of four or five floors?" asked the French-language daily Aujourd'hui Le Maroc.

An official inquiry has been launched and the local authorities have promised to punish anyone found guilty of violating building regulations.

But there are more immediate concerns for those forced from their homes in El Hank.

Some families have already been provided with temporary accommodation, at the orders of King Mohammed VI, but others are still waiting.

"It's now Monday and we're still in the street," said Abdelilah el-Gouti, whose building stands next to one that collapsed and was evacuated.

"The immediate challenge is to find a roof over our heads, especially during this (Muslim) holy month of Ramadan. Then the inquiry needs to find out who was responsible."