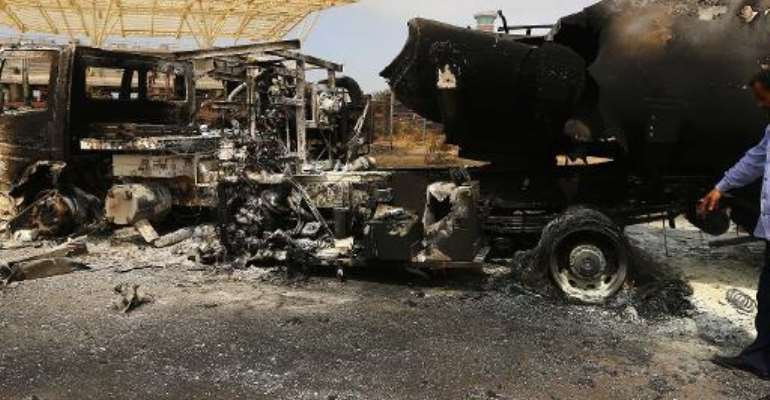 The wreckage of a truck and an airplane are seen at Tripoli international airport in the Libyan capital on July 14, 2014. By Mahmud Turkia (AFP)

Tripoli (AFP) - The United Nations announced Monday that it was evacuating its remaining staff from Libya, after deadly clashes closed Tripoli airport and severed air links with the outside world.

The fighting between liberal and Islamist militias came after a June general election mired by fraud allegations intensified a struggle for power between rival armed groups that has wracked the North African oil producer ever since the 2011 overthrow of dictator Moamer Kadhafi.

"UNSMIL (United Nations Support Mission in Libya) temporarily withdrawing staff from Libya because of security situation," the mission, which already pulled out dozens of personnel last week, said in a statement.

"After the latest fighting on Sunday and because of the closure of Tripoli international airport, the mission concluded that it would not be possible to continue its work ... while at the same time ensuring the security and safety of its staff," it said.

"This is a temporary measure. Staff will return as soon as security conditions permit. The United Nations, which stood by the Libyan people in their revolution in 2011, will not abandon them as they seek to build a democratic state."

Witnesses said a UN convoy left Tripoli on Sunday by road headed for the Tunisian border, 170 kilometres (110 miles) to the west.

Tripoli international airport was shut down for at least three days after the Zintan militia which controls it came under attack by Islamist fighters on Sunday.

At least six people were killed in heavy exchanges of fire, a health ministry official said, and several Airbus planes were damaged on the tarmac.

On Monday, Libya also suspended all flights to and from third city Misrata, west of the capital, which is dependent on Tripoli airport for its operations.

"Libya is now practically cut off from the outside world," a source at Tripoli airport said.

At least 10 aircraft of Libyan carriers Afriqiyah Airways and Libyan Airlines were damaged in the fighting, a security official said.

"Most them will need maintenance before they can fly again," said Al-Jilani al-Dahesh.

An AFP photographer sighted several passenger aircraft on the tarmac riddled with bullets.

On Monday, the situation was calm in the capital, although Islamist militias have vowed to expel their liberal rivals based in Zintan, a hill town southwest of Tripoli.

Sunday's Tripoli airport attack was claimed by Islamist militias determined to oust the Zintan group from key sites it controls in south of the capital, including the airport.

The attack was beaten off, but there were also clashes at other Zintan-controlled sites for several hours, especially on the road to the airport.

Libya has been awash with weapons since the NATO-backed uprising three years ago that toppled and killed Kadhafi.

The well-armed and disciplined Zintan militia is officially under the jurisdiction of the defence ministry.

But it has sided with well-armed forces loyal to renegade former general Khalifa Haftar who launched an offensive against Islamist militias in second city Benghazi in mid-May.

They agreed at talks near Tunis to set up twin commissions to broker talks and attempt to prevent any spillover of violence.

Delegates underlined the need to "resolve (the problem of) pockets of terrorism in Libya, which are a source of concern for Libya and the countries in the immediate vicinity."

Eastern Libya, particularly its main city Benghazi and the hill town of Derna, have become strongholds of jihadist groups, made notorious by a 2012 attack on the US consulate that killed the ambassador and three other Americans.

The European Union called for the new parliament elected in last month's controversial poll to convene as quickly as possible and form a new government to head off worsening violence.

"The EU trusts that the new parliament will be in a position to embody national consensus and play its role in forming a government with wide political support," it said.