Nana Akufo Addo Is Never The Problem But.... 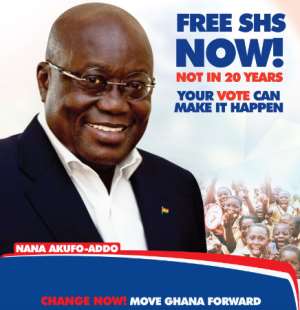 Some paid agents and assigns within the NPP are avowedly and purposely in pursuit of the wanton destruction of Nana Akufo Addo. They have strenuously been publishing completely misleading views about the man, Nana Akufo Addo. They are desperately trying to convince the Ghanaian public that NPP has been losing elections because of him. Subsequently, they are warning the NPP delegates to not vote to elect him as the party's flag bearer during the party's delegates' conference scheduled for December 2014.

For the attention of Nana Addo's detractors, and to inform the Ghanaian public, Nana did never lose Election 2012. Anyone who will be honest with himself and be faithful to Ghana will agree with me on the assertion that he won election 2012. The facts that emerged in the course of the Supreme Court proceedings on Election 2012 petition bear me out. Any sane person that had the opportunity to watch the live telecast of the court proceedings will clearly tell that the petitioners (Nana Addo & Co) won the case.

However, the corrupt and unprofessional judges for a reason or the other declared an obviously biased verdict. Why did most of the judges, principally William Atuguba, flee the country just after pronouncing his nonsensical verdict? The evil person will flee without being chased, so the wise man says.

Back to Bataan! Nana Akufo Addo has become a victim to election rigging partly because of his detractors within the NPP. His enemies within the NPP will have him always robbed at elections so they can accuse him of any nonsense that crosses their mind. This is exactly what they are doing from Alan Kwadwo Kyeremateng's camp.

Has Nana Addo requested that nobody competes with him for the NPP flagbearership? No, not as far as I am aware of. Why then are people intentionally defaming him with the ulterior motive of bringing him down? What will they gain by their wicked attitudes toward him and the good people of Ghana?

Has he stepped on anyone's toes or rubbed salt into anyone's cancerous sore by his declaration that he is not corrupt? I should think so; else there will be no justification for these blatant "pull him down" attacks on him. They are permanently attacking his age, his physique but not his personality. Age is just a number. At his age, he is more energetic than those who claim youthfulness because they were born after Ghana obtaining her independence from the British colonial masters.

Do Ghanaians prefer a young person who is corrupt and will institutionalize corruption, selective justice, abuse of incumbency, and mess up the economy through utter incompetence as being witnessed under the current President Mahama government to be a leader, to having an old person with entirely opposite qualities? Have we forgotten the adage, "we dispatch the wise person (emissary) on a mission but not the long-legged"?

Similarly, success in governance is not obtained by one's outward beauty but by their intelligence, dedication, dynamism, honesty and competence.

As the saboteurs are out there to destroy Nana Akufo Addo to prove their resounding wolf-like cries, I will remind Ghanaians of one thing, thus, what God has purposed for Nana Addo will surely come to pass regardless of the problems confronting him.

Let us remind ourselves of the biblical Joseph who became the patriarch of the Israelites. When he revealed his dream to his brothers and father, in which he had become their leader with all bowing to him, they hated him with passion. They plotted against him. They cunningly got rid of him, sold him to some Midianite merchants who in turn sold him to Pharaoh in Egypt.

Joseph went through a lot of troubles. He became a prisoner. However, in the end, he was lifted and positioned as God had purposed for him. Both his father and brothers kowtowed to him as revealed in his first dream subsequent upon which he was sold into slavery. Please read the Bible - Genesis 37.

Keep on scheming against Nana Addo, as strongly and maliciously as you can, in the end, God's wish for him will prevail. Some of you are surely with the NDC to ensure his defeat even if, he is finally elected the flag bearer of the party in 2016. This is to prove your obnoxious point that Nana is the cause of NPP's defeat at elections. This is much the reason why you have planned some rumoured Agenda 2020.

Man proposes but God disposes. It is my fervent prayer to God to let it come to pass exactly what He has in His infinite wisdom, said about Nana Akufo Addo. This man has suffered a lot of insults and humiliation under the hands of his own NPP family and the NDC for just being incorruptible unlike others.

Finally, Ghanaians are to be aware of the fact that Nana being short-changed at elections is not his fault or personal doing, but the work of some Ghanaians, especially, certain NPP members. They are determined to derail God's plans for him. But try as they do, they will fail in the end.

These saboteurs within the NPP after damaging Nana recoil into their lair whenever it is campaign time. They leave him to battle it alone and when he gets robbed as made vivid in the live telecast of the Supreme Court proceedings on Election 2012 petition, they blame him for causing the defeat.

Why should I continue to lament about the deplorably wicked behaviour of fellow NPP members that cost us the opportunities to win elections? I have already made my point clear.

Nonetheless, let me leave them with a piece of advice, especially those determined to sabotage Nana Akufo Addo through wilful character assassination. "If the malicious person knew he would be eating the head of the game, he would have been more prudent when roasting/smoking it" or, "If you do not allow your fellow to take nine steps, you will yourself not take ten".

Mind you, when you sabotage Nana Akufo Addo, you are indeed sabotaging the entire suffering masses in Ghana. Currently, it is only Nana who has the key to solving their problems. He holds the key of honesty and incorruptibility. This is the key needed to unlock the door to the room that holds the solutions to Ghana's socio-politico-economic problems.

I dedicate this publication to Nana Dokuaah and all Al-Jazeera girls worldwide. Additionally, it is also dedicated to all Ghanaians wishing the best for Ghana through good governance.