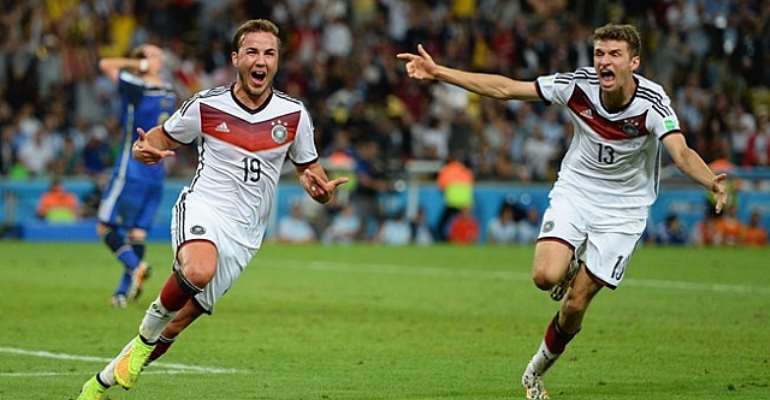 Germany beat Argentina 1-0 in the final of the 2014 FIFA World Cup on Sunday at the Maracana thanks to an extra-time goal from Mario Gotze.

After 113 goalless minutes in the World Cup final, Gotze — a second-half substitute for Miroslav Klose — controlled Andre Schurrle's left-wing cross beautifully on his chest before volleying past Sergio Romero.

Twenty-four years after their last World Cup triumph, which was also achieved against Argentina, Germany could celebrate again — coach Joachim Low realising a dream that began eight years ago when he first took charge of theNationalmannschaft.

Germany had been dealt a blow before kick-off as Sami Khedira suffered a calf strain; Joachim Low threw Christoph Kramer in for his first international start in place of the Real Madrid midfielder.

The magnificent Maracana was a sea of blue and white, with Argentina fans comfortably outnumbering their European counterparts. After 20 minutes, they watched on agog as Gonzalo Higuain missed a wonderful opportunity to open the scoring.

A clumsy defensive header from Toni Kroos put Higuain in the clear but, with only Manuel Neuer to beat, he snatched his shot wide.

Ten minutes later and Higuain thought he had made amends as he steered Ezequiel Lavezzi's cross past Neuer. The Napoli striker spun away in wild celebration only to realise that the assistant had raised his flag. Replays showed Higuain to be clearly offside.

After twice nearly going behind, Germany — enjoying most of the possession — rallied to create a chance of their own.

Andre Schurrle, who came on as a substitute for Kramer after the youngster was seemingly concussed in a collision with Ezequiel Garay's shoulder, let fly from 20 yards. The shot was heading goalwards but Albiceleste keeper Romero dived spectacularly to keep the ball out.

In an end-to-end first half, it was then over to Argentina again; Lionel Messi skipping clear before a cross-cum-shot was cleared away just in front of the goal-line by Jerome Boateng.

The best chance of the first 45, however, came in stoppage time. Defender Benedikt Howedes rose unmarked from a corner but with the goal at his mercy he crashed a header against the post.

Argentina came out the sharper at after the interval — Sergio Aguero a half-time substitute for Lavezzi — as Higuain went close. Messi went even closer soon after. Lucas Biglia's neat through-ball found the Barcelona star but his shot was dragged narrowly wide of Neuer's goal.

The second-half deteriorated into a much scrappier affair, with chances at a premium. One somewhat controversial moment came when Neuer came marauding to the edge of his penalty area to punch the ball away, his knee colliding with Higuain's face after making the clearance. Surprisingly, the referee blew for a foul against Higuain, who was later replaced by Rodrigo Palacio.

Schurrle, Messi and Kroos all had further half-chances but none could convert and the match went to extra time.

The match burst back into life after the 90 had ended, Romero saving well from Schurrle before, at the other end, Palacio lifted the ball over Neuer, only to see it creep wide.

In the second half of extra time Aguero appeared to be fortunate to escape a red card as he seemed to swing a punch towards Schweinsteiger that left the Germany midfielder bleeding from below his eye.

But it was to be Germany who delivered the knockout blow, Bayern Munich playmaker Gotze finishing with aplomb as a European nation won the World Cup on South American soil for the first time.