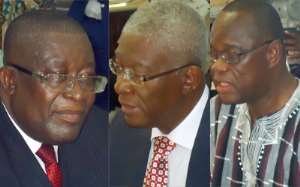 The Appointments Committee of Parliament on Wednesday vetted four ministers appointed by the President in his recent ministerial reshuffle.

The vetting was gruelling as the New Patriotic Party (NPP) MPs participated fully for the first time in such an exercise since President Mahama was sworn as President.

Taking his turn, the minister-designate for Lands and Natural Resources promised to wage war on illegal miners otherwise known as 'galamsey' operators who have been destroying forest covers, lands and water bodies in the course of their operations, saying that when he becomes the substantive minister he would ensure that a law is passed to allow for confiscation of all equipment such as excavators used in such operations.

He said even though there are laws that ensure that 'galamsey' operators are prosecuted in law courts when arrested, people continue to engage in this illegal venture to the detriment of the nation and that if a law is passed to allow for the seizure and confiscation of equipment used to do the illegal mining it would surely discourage people from engaging in the venture.

He said it is unfortunate that many 'big' men and chiefs may be behind such illegal activities and that when he becomes the minister, he would ensure the laws guiding small-scale mining are implemented to the letter.

“We would encourage the use of LPG in the rural areas so that the forest is not destroyed in order to get firewood or we would be growing rubber plants across the country which could alternatively be used for firewood,” he noted.

The minister-designate for Lands and Natural Resources also told the committee that to help reduce or eradicate the numerous land disputes in the country, the ministry would carry out education on how land could be properly registered after which properly registered lands would be periodically published for the knowledge of members of the public.

The Minister-designate for the Upper East Region, Mr Tiigah, was queried as to whether he was aware that his nomination had generated regular protests and demonstration in the region by supporters of the ruling party, but he said he was completely unaware of such a development, stressing that when he was leaving the region on Sunday for the vetting, the region was completely calm.

He said when he is approved by Parliament, he would ensure that there is total peace in Bawku, which has been a flashpoint in the region and also help promote development in the region especially in the area of tourism and farming.

The Minister-designate for the Central Region, Aquinas Tawiah Quansah, for his part said he would be using the Central Region Development Commission (CEDECOM) as the commercial wing of the administration of the region to promote development.

He also said he would vigorously promote agro-processing in the region and add value to whatever agricultural products that come from the region.

The Minister-designate for the Eastern Region, Antwi-Boasiako Sekyere for his part said it is his plan to immediately organise an economic forum in the region to ensure that the economic potentials of the region are properly harnessed.

He also noted that it is the plan of the NDC government to make Koforidua which is the region's capital and the closest regional capital to Accra a conference 'city' and would therefore find a strategic partner to completely modernise the EREDEC Hotel to international standard.