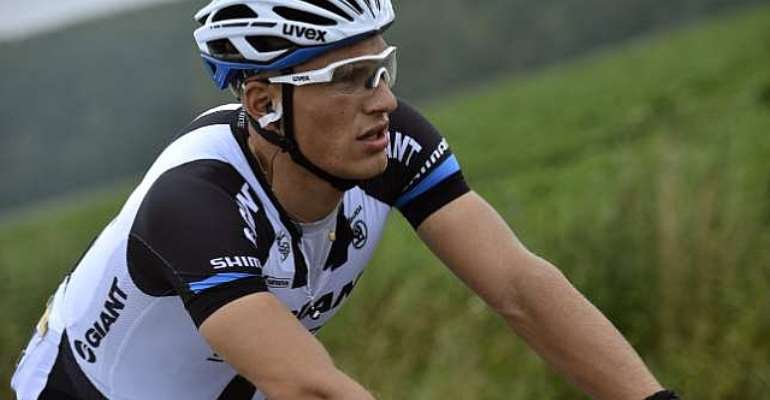 Crosswinds wreaked havoc on the peloton during Thursday's 194-kilometre stage from Arras to Reims, while a rapid run into the finish led by Omega Pharma-Quick Step and Cannondale, saw Giant Shimano struggle to keep up.

Kittel, who had won three of the previous five stages of Le Tour, was left to roll across the line 54 seconds behind victor Andre Greipel (Lotto-Belisol).

It sparked concerns Kittel, arguably the best pure sprinter left in the race after Mark Cavendish's (Omega Pharma-Quick Step) crash on stage one, had not recovered from a fall during Wednesday's fifth stage.

But Giant Shimano team director Christian Guiberteau claimed Kittel was simply a bit fatigued after the cobblestones of stage five and would be fine to challenge for the green points jersey over the next two weeks.

"It was a little difficult for Marcel today. It was not only the consequences of his crash but he just didn't have the legs today," Guiberteau said.

"With the echelon [a tactic to deal with the crosswinds], the team struggled to get organised. It was not a mechanical or a puncture like I heard here and there. It was just a bad day.

"Everybody's tired. Everyday something happens and everybody's worn out."

Having missed out on points on Thursday, Kittel (135) dropped to third in the points classification behind Bryan Coquard (Europcar), who finished eighth to reach 137.

Peter Sagan (217 points) remains in the green jersey and was pleased after being denied the opportunity to properly open up in the sprint.

Sagan also crashed earlier in the stage but recovered to be at the front in the closing metres.

"That was bad to crash again today but I have nothing broken, so I'm fine. A guy crashed in front of me and another crashed behind, he's the one who took me down. But after two crashes I'm still here while other riders have had to go home," the 24-year-old said.

"I just hope that my bad luck is gone. Today I've been boxed in and I came fifth without even sprinting, so it's all good for the green jersey.

"Maybe tomorrow is my chance for a stage win finally but firstly I have to recover from my crash."