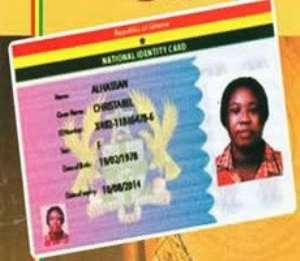 According to The Finder newspaper, aggrieved workers of the National Identification Authority (NIA), who spoke on condition of anonymity are demanding that President John Mahama probes the authority over allegations of financial malfeasance.

According the report, the workers are claiming that there is a deliberate ploy to discard millions of printed Identity (ID) cards which cost the nation millions of cedis to print.

The aggrieved workers, The Finder newspaper said, are pushing for the distribution of the printed cards but management and the board want to discard the cards and go for instant printing of cards by a private company at additional cost to the state.

"The workers, who spoke to The Finder on condition of anonymity, alleged that the management and the board are running down the NIA and intimidating the staff", the newspaper reported in its July 9, 2014 edition.

Read the rest of The Finder report below:
For example, the workers said at a staff durbar on Friday, June 27, a staff who questioned why the cards were not being distributed and in the process eroding public confidence in the NIA, was told by a management member to resign if she cannot be part of the shame.

They stated that as a result of mismanagement, data captured nationwide remain on the memory of computers because the machines to print the cards have all broken down.

According to the workers, on June 30, a security man was arrested by the police and was only granted bail on Wednesday, July 2, because hard drives of some of the machines had been stolen.

The workers believe that the removal of the hard drives was a deliberate move to render the machines useless and pave way for the new company.

When contacted, Head of Public Affairs of the NIA, Madam Bertha Dzeble confirmed that all persons holding the existing cards would be required to return them for the smartcard when IMS begins instant issuance.

“This is because the new one will be based on 10 fingerprints, as well as additional information to be collected to serve the needs of user agencies. Until such a time, the current Ghanacard remains the only valid national ID card,” she added.

She explained that the data processing system developed a fault that had contractual issues, which were being addressed by their technical solutions providers, saying as soon as it is fixed, the NIA can resume printing of cards.

She said about 1.7 million cards are locked up in their office and yet to be distributed because the NIA does not have the necessary funds to pay personnel to continue to sit at registration centres to wait for people to pick the cards, explaining that the NIA sent the cards to almost all the centres where registration was done, but some persons failed to turn up to collect their cards.

According to her, the problems associated with this approach of central printing and later distributing the cards made the NIA take the decision to adopt instant printing and issuance of cards to solve the problem of uncollected cards.

Madam Dzeble said a little over 15 million Ghanaians have been registered nationwide and a total of 2.767 million cards printed.

On how much has been invested in the NIA since inception, she said “most of the capital investments in terms of procurement of equipment and technical solution, as well as construction of the NIA Head Office were paid directly from the Ministry of Finance, so I do not know the amount invested so far.”

The NIA Head of Public Affairs explained that NIA does not have the funds needed to complete the National Identification System and took advantage of government's policy of Public-Private Partnership to bring in the needed funds.

“In this regard, the private partner provides the funds for the project upfront, which is recouped through revenue generated. The Public-Private-Partnership Agreement Committee (PPPAC) of the Ministry of Finance is now considering an expansion of the contract with IMS to enable NIA issue smartcards to Ghanaians,” she stated.