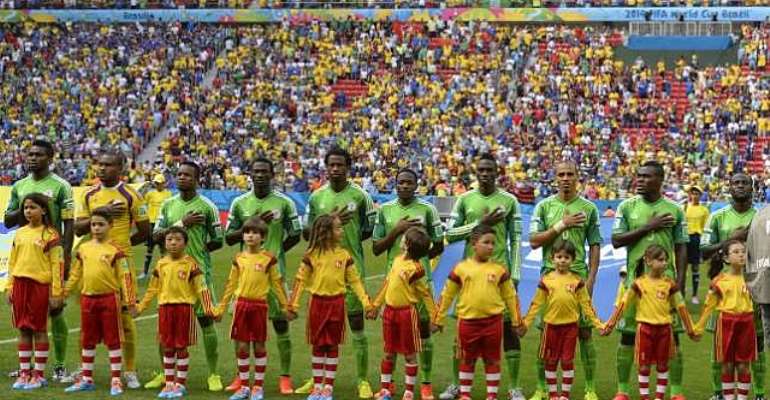 The Nigerian Football Federation (NFF) has been suspended from the world governing body on account of government inteference.

FIFA initially warned the NFF that they could be banned from international football if they could not prove their independence from the Nigerian government.

--
The FIFA Emergency Committee has decided today, 9 July 2014, to suspend the Nigeria Football Federation (NFF) with immediate effect, on account of government interference. Article 13, par. 1 and article 17, par. 1 of the FIFA Statutes oblige member associations to manage their affairs independently and with no influence from third parties.

The decision follows a letter sent by FIFA to the NFF on 4 July 2014, in which it expressed its great concern after the NFF was served with court proceedings and consequently an order preventing the president of the NFF, the NFF Executive Committee members and the NFF Congress from running the affairs of Nigerian football was granted by a High Court of the Federal Republic of Nigeria.

The said court order compelled the Nigerian Minister of Sports to appoint a senior member of the civil service to manage the NFF until the matter was heard in court, without giving any date for such a hearing. The authorities then appointed a person who decided to convene an extraordinary general assembly on 5 July 2014. This extraordinary general assembly was convened in violation of the NFF statutes.

Originally, an elective congress had been planned by the NFF to take place on 26 August 2014.

The suspension will be lifted once the court actions have been withdrawn and the properly elected NFF Executive Committee, the NFF general assembly and the NFF administration are able to work without any interference in their affairs.

As a result of this decision, no team from Nigeria of any sort (including clubs) can have any international sporting contact (art. 14 par. 3 of the FIFA Statutes). During the period of suspension, the NFF may not be represented in any regional, continental or international competitions, including at club level, or in friendly matches. The most immediate effect is that Nigeria will not be entitled to participate in the upcoming FIFA U-20 Women's World Cup (5-24 August 2014) should the suspension not be lifted by 15 July 2014.

In addition, neither the NFF nor any of its members or officials may benefit from any FIFA or CAF development programmes, courses or training during the suspension period.