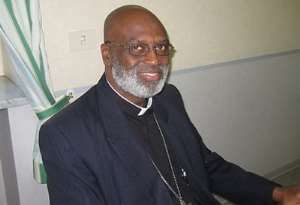 Archbishop, Charles Gabriel Palmer-Buckle
Last Sunday's National Thanksgiving and Prayer Service held at the Holy Spirit Cathedral in Accra was characterised by interesting yet contradictory remarks by some dignitaries gracing the religious function.

Accra's Metropolitan Archbishop, Charles Gabriel Palmer-Buckle, provoked varied thoughts and therefore made the headlines when he told President John Mahama to 'listen to the voice of God.'

The good counsel from the renowned cleric reminded many about the Kumasi 'Yentie obiaa' taunting from the President's activists when he visited the Garden City and ruffled many feathers with his out-of-tune rhetoric.

There were some in the opposition who thought the song was played upon the President's request to drum home his disregard for their 'ugly noises,' although we thought at the time that it was a conduct beneath him.

We think that there is a problem here since spiritual dignitaries like Archbishop Buckle speak on behalf of God as they transmit the words from the Holy Scriptures. Maybe the President should not listen to fake prophets and soothsayers who see nothing wrong with trading their conscience for the comforts of life, even as their congregations are hungry in a land of plenty. These are clerics who endorse the stealing of the people's mandate and are ready to pontificate about peace but ignore the importance of justice.

Be it as it may, the President and his team are impervious to good counsel and have proven over time that when their policies come under scrutiny and they are advised accordingly, their responses are anything but decent and gentlemanly.

Perhaps that accounts for the almost permanent fence-sitting by the opposition parties and others not belonging to any political grouping as things fall apart.

How can those outside government advise the persons at the helm when these admonitions given in good faith will always attract the wrath of foul-mouthed government appointees?

It is lamentable that none of these, if you like government hounds – some of them as young as children or even grandchildren of the sources of the counsels – has ever been called to order by the President. Those with mastery over insults are most likely to be promoted.

The Archbishop's counsel was shrouded in diplomacy so it could not have prompted a change in persons who are at the throttle of governance. Even as we salute Archbishop Palmer-Buckle for identifying the sources of the country's challenges, we think that under the prevailing circumstances, calling a spade a spade would be more appropriate. After all, we know why the Cedi is under pressure.

With things falling apart and no light at the end of the tunnel, the state of hopelessness which Ghanaians are feeling is understandable. It is unfortunate therefore that President Mahama is peeved that his compatriots would not be encouraged by his words of hope. Psyche of pessimism? Of course when the country is in a permanent state of decline, what should we expect?

Prayers are acceptable only when those engaged in such intercessions repent from their iniquitous ways such as corruption and always seeking to change the course of elections through crooked ways.

Our God is Holy, so are His ways; and the renowned clerics know this.