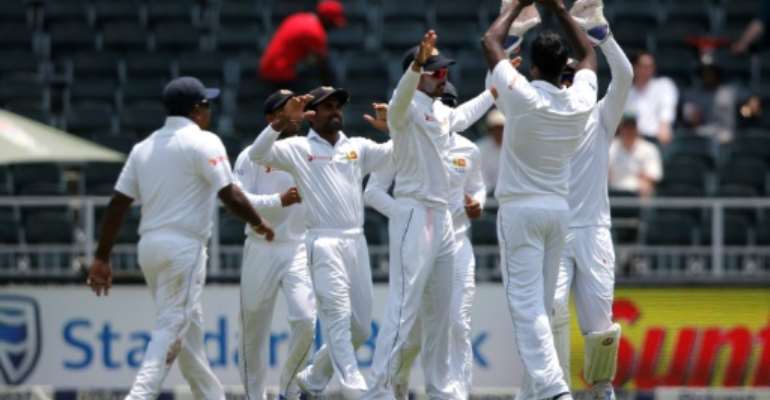 Sri Lanka celebrate the wicket of South Africa opening batsman Dean Elgar (not shown) during the third Test at Wanderers Cricket Stadium in Johannesburg on January 12, 2017. By Marco LONGARI (AFP)

Johannesburg (AFP) - Sri Lanka struck a double blow when they dismissed both South African opening batsmen within six balls on the first morning of the third and final Test at the Wanderers Stadium on Thursday.

South Africa were 79 for two at lunch after deciding to bat on a well-grassed pitch in overcast conditions.

Stephen Cook and Dean Elgar survived the first hour before both were out soon after the mid-morning drinks break with the total on 45.

Cook, playing in a Test on his home ground for the first time, was leg before wicket to Sri Lankan captain Angelo Mathews for ten.

He sought a review of umpire Bruce Oxenford's decision but was palpably in front of his stumps.

In the next over Elgar, on 27, pushed at a lifting delivery from Lahiru Kumara and was caught at first slip by Dimuth Karunaratne.

Hashim Amla, playing in his 100th Test, walked out to a sustained ovation from a small crowd.

He made a tentative start and was struck on his right glove by Mathews before he had scored and was dropped at gully by Dhananjaya de Silva off Suranga Lakmal when he had five. He was on six not out at lunch.

South Africa opted for an all-pace attack and gave a first cap to Duanne Olivier, 24, with left-arm spinner Keshav Maharaj being left out.

Left-arm seamer Wayne Parnell replaced Kyle Abbott, whose contract with Cricket South Africa was cancelled after he revealed he had signed a Kolpak contract to play English county cricket with Hampshire.

"These are nice conditions for Duanne to make a debut," South African captain Faf du Plessis said at the toss.

"He's got a bit of pace and skill. Our best team in general conditions has a spinner but at the Wanderers in the past spin doesn't really play a role."