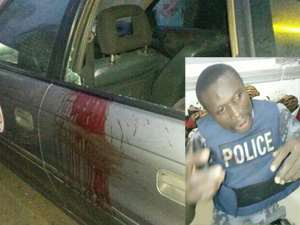 The action of Lance Corporal Salam led to the irate youth descending on management of Marwako restaurant, who were alleged to have saved the police officer. The angry youth allegedly destroyed properties of the restaurant worth thousands of Ghana cedis.

Not satisfied, they were alleged to have also set ablaze three vehicles belonging to some customers at the restaurant, including a Toyota Landcruiser Prado with registration number GN 1635-14.

Lance Corporal Salam's interdiction is to pave way for the Police Administration to investigate the matter.

The Nima Divisional Police Command has also launched a search for the youth who purportedly destroyed properties belonging to the Marwako restaurant, and the burning of vehicles.

It will be recalled that the Maamobi suburb of Accra was Saturday night turned into an arena of commotion when an angry mob vented their spleens on a local restaurant, setting it ablaze together with three vehicles.

Police information gathered indicated that Lance Corporal Salam allegedly shot the taxi driver whose name was only given as Kwame Osei, 30, when he refused to stop after he was signaled by the policeman to stop for a routine check.

Reports indicate that Lance Corporal Salam reportedly told his senior colleagues that he suspected the Opel Astra taxi to be a stolen car.

He then attempted to stop the car but the driver refused and sped off.

Based on that, L/Corporal Salam is reported as saying that he attempted to shoot the tyres in an attempt to deflate them, but the bullets hit the driver in the process.

The taxi driver was rushed to the 37 Military Hospital from where he was later moved to the Korle-Bu Teaching Hospital for treatment.

When the youth in the area heard what had happened – suspecting that the cabbie might have died from the shooting – charged on the policeman, who was allegedly being kept by the Marwako owner, and vandalized the place.