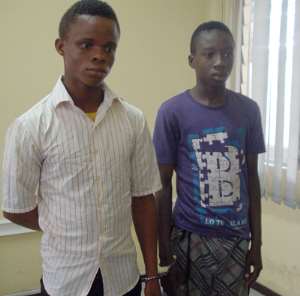 From left: Michael Udoh and Victor Aniete Solomon
One of two Nigerians standing trial for allegedly kidnapping an eight-year-old boy, was yesterday handed a five-year jail term in hard labour by an Accra Circuit Court.

This compelled the trial judge, Ms Sedina Agbemeva, to defer sentencing of Sunday to July 8.

However, his accomplice, Michael Udoh, 14, a mobile phone seller, denied the charges.

The duo are said to have agreed and acted together with a common purpose to kidnap the boy.

Sentencing
Delivering the sentence, Ms Sedina Agbemeva said Sunday appeared remorseful and had also taken into consideration the fact that the accused person had pleaded guilty straight away.

Earlier, Sunday had explained to the court that he and Udoh decided to embark on the act because they needed money to go back to Nigeria.

However, the trial judge said that the explanation was not a defence.

Udoh was also admitted to bail in the sum of GH¢2,000 with two sureties.

Facts
Prosecuting, Detective Inspector Samuel Sarkwa said the complainant – one Samuel Aidoo – is a mason/carpenter residing at Ofankor with his family, while Sunday, who has no fixed place of abode, sleeps at the Achimota lorry park.

He said Sunday is a native of Akwa Ibom State in Nigeria who came to Ghana in April 2014 ostensibly to look for a job.

Prosecutor said Udoh also came from the same State to Ghana in June 2014 to look for a job, adding that the two got to know each other at the same lorry park and became friends.

Detective Insp. Sarkwa said the two decided to go to the Latter Day Saint Church at Achimota where they could get access to some of the Sunday school children, indicating that they attended church service the first time and took part in the Communion Service.

He said according to Sunday they had pity on the children and could not carry out their plan until June 22 when he sighted the boy – son of the complainant – outside and lured him out of the church premises in the guise of taking a snapshot of him with his mobile phone.

The prosecutor said Sunday took the child to Tudu at the Aflao lorry park and that because he had no money on him, he begged for arms and was given GH¢15 out of which he used GH¢14 as transport and used the remaining GH¢1 to buy food for the child on their way.

The police officer said Sunday took the child to Aflao and kept him in a house until he called the Bishop of the Achimota ward of the Latter Day Saints, telling him that he had found the missing child and was with him at Aflao and as such, should bring GH¢10,000 before he could get his child back.

D. Insp. Sarkwa further told the court that the message was sent to the father and on Monday, June 23, called Sunday who repeated the same statement he had made to the Bishop. Sunday began to send threatening messages to the victim's father who made a report to the police, leading to his arrest with the child at Aflao.

He said Sunday in turn led the police to arrest Udoh at his hideout.