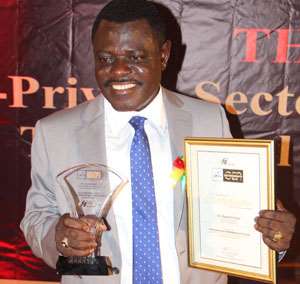 The company, last week, ended a promotion initiated to reward its customers for their unalloyed loyalty since the oil marketing company has also been a beneficiary of several awards.

Unity oil has over the years won several awards because of its exclusive services to customers.

Also, the company indicates that its customers have been loyal because they find its services more business-friendly.

It is as a result of such unrivalled relationship between the company and the customers that it has tried to satisfy customers even in times of fuel shortages.

Unity Oil's recent promotion was tailored to reward loyal customers and satisfy their needs as well as those of non-customers.

The promotion formed part of the company's corporate social responsibility.

The promotion, which has been running for two years, ended with a final draw in Accra on Tuesday July 1, 2014.

The grand awards went to Emmanuel Kusi and Kofi Amponsah.

One of the award winners
There were also mini-draws by which 100 customers won 2500 gallons of petrol and diesel while souvenirs including T-shirts and pens were also distributed to customers.

CEO of Unity Oil, Dr Kwame Kyei, who presented the car keys to the winners, said he was highly elated to give back to society what he had earned from it through the promotion.

He added that Unity Oil's primary motive was to satisfy the needs of customers and make them happy.

The CEO therefore advised other well meaning Ghanaians to offer their best towards the development of the country and the improvement of the lives of people.

Dr Kyei commended the drivers for their patronage, assuring that more goodies were in the offing.

The winners thanked the management of the company for having their customers at heart.