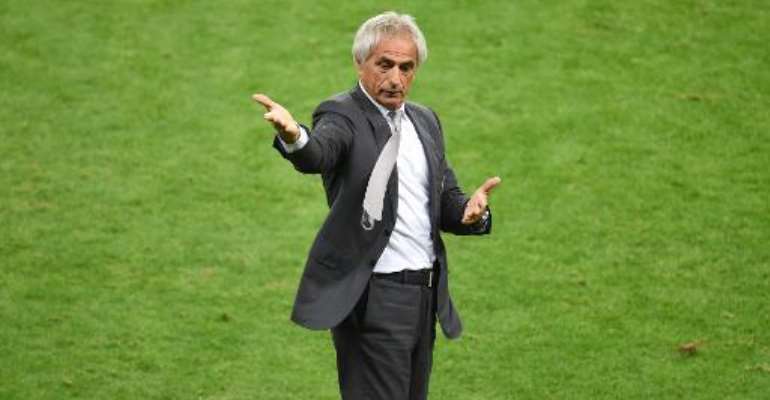 Algeria's Bosnian coach Vahid Halilhodzic gestures during the Round of 16 football match between Germany and Algeria at Beira-Rio Stadium in Porto Alegre during the 2014 FIFA World Cup on June 30, 2014. By Christophe Simon (AFP/File)

Algiers (AFP) - Algeria coach Vahid Halilhodzic has announced that he will not remain as coach after leading the country to an historic last 16 finish at the World Cup.

The 61-year-old Bosnian saw Algeria into the knockout stages for the first time in their history in Brazil before an extra-time defeat to Germany.

"I leave proud of my record after serving out my contract with the FAF," he said on the official website of the Algerian Football Federation (FAF).

"Having lived for three years in Algeria, my family obligations and the attraction of new sporting challenges weighed heavily on my decision."

Halilhodzic's contract expired after the World Cup but his departure comes despite calls for him to stay on.

Algeria beat South Korea 4-2 in Group H, and also drew with Russia and took the lead against Belgium before losing 2-1 and finished second in the group behind Marc Wilmots' side.

They put up an impressive performance against the Germans before losing 2-1 in extra time.

Halilhodzic added: "I want to thank, first of all, his Excellency President Abdelaziz Bouteflika, whose warm words profoundly touched me.

"I also want to thank Prime Minister Abdelmalek Sellal for his encouragement and kind wishes, and the president of the FAF, Mohamed Raouraoua, with whom I have worked for three years to realise our objectives and who put at my disposal a squad with all the necessary means to achieve this difficult mission.

"I wish to pay tribute to the players and the technical, medical and administrative staff who gave me every assistance throughout this mission.

"The wonderful Algerian public wished me well since the day I first arrived and have remained loyal to me. I will always keep the fond memory of the extraordinary welcome they gave us on our return from the World Cup."

Halilhodzic took over in 2011 on a three-year deal to qualify the Desert Foxes for the 2013 Africa Cup of Nations and the World Cup.

He added: "The only sour note, which I want to confront, is the behaviour of certain - though thankfully not all - members of the press, who never ceased to stigmatise not only my work but also me and my family.

"I will never forget nor forgive that," added Halilhodzic, who on account of his febrile relations with the Algerian press did not turn up at the press conference after the match with the Germans.

He has been tipped to take over Turkish side Trabzonspor with Frenchman Christian Gourcuff, former coach of Ligue 1 side Lorient, touted as a possible successor for the Algeria job.