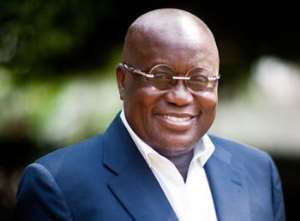 Nana Akufo-Addo
The Nana Akufo-Addo campaign team has dismissed media reports claiming that the 2012 presidential candidate of the New Patriotic Party (NPP) is standing down in the impending flagbearership race of the party.

'The attention of Akufo-Addo For 2016, UK, has been drawn to vicious lies against Nana Addo Dankwa Akufo-Addo.

'The new lies is that Nana Akufo Addo has serious health issues and may not contest for the NPP presidential candidate race. They allege falsely that Nana Akufo-Addo recently visited his doctors in the UK and was advised not to contest any elections due to ill-health.

'Akufo-Addo For 2016, UK, has traced the sources of these rumours and would like to state that there is no truth whatsoever in such rumours deliberately spread to cause harm to Nana Akufo-Addo in his bid to lead the party again. The public and the numerous supporters of Akufo-Addo and NPP at large must treat any such information with the contempt it deserves,' a statement by the campaign group said.

Nana Akufo-Addo, according to the group, is healthy and ready to lead the NPP to victory and would file his nominations today.

'Nana Akufo-Addo is fit and ready. We all look forward to him returning his nomination forms on Monday, 7th July, 2014. The campaign to rescue Ghana is on. Join us now to build the future which begins after 2016.'

The group added: 'Nana Akufo-Addo is fit, prepared and ready to contest the party primary, contest the 2016 election, and God willing, win to give the people of Ghana the transformational leadership they deserve.'

In this era of retrogression under the NDC, it stated, more and more people are seeing in Akufo-Addo the determined, experienced, incorruptible, competent, compassionate and visionary leadership that have been missing under President John Mahama.

'The people of Ghana know that the detractors of Nana Akufo-Addo, who have no message, would try to make propaganda about his age and health. It would not work for them!

'It must be noted that Nana Akufo Addo will not be the first or the last to stand election at age 70, to be elected president. Many successful presidents like Nelson Mandela, Ronald Regan whose legacies are recognised globally, were all over 70 when they took office as presidents,' it stressed.


Last Day
Meanwhile, barring any last minute hitches, all seven persons who picked up nominations forms to contest the flagbear position of the NPP are expected to file by the close of day today.

The other aspirant is the Member of Parliament (MP) for Mampong, Francis Addai-Nimo.

All five are therefore expected to storm the party's Asylum Down headquarters today to file their nominations.

Though it is not clear what time they would go and drop their filing fees, that of Nana Akufo-Addo is expected to attract a lot of attention and draw crowds to the location even though Nana wanted a low-key event.

He is expected to arrive at the headquarters around 3:30pm today.

Per the provisions of the NPP constitution, if more than five persons file their nominations to contest for the flagbearership position, the leadership must convene a special delegates' congress to prune down the number to five.

The amended constitution of the party states that if more than five candidates file and are vetted to contest, a special electoral college of some 847 party executives including all 275 constituency chairmen and all NPP MPs would have to vote to prune down the number to five.

The fate of the remaining five as to who gets elected to lead the party into the crucial 2016 general elections would then be determined by the actual 145,000 delegates at the congress to elect a flagbearer.

This is part of the reasons all 10 regional Chairmen of the party are pushing for an early congress, preferably September 2014, to avoid breaching sections of the party's constitution which prescribes that the NPP elects its flagbearer two clear years before the next general elections when in opposition.