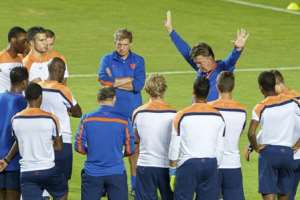 Dutch coach Louis van Gaal proved again why he's the best student-of-the-game under the planet on Saturday when his substitute goalkeeper Tim Krul won the day for the Oranje against the fearless Cost Rican's at the Arena Fonte Nova.

After a goaless 120 minutes of an end-to-end football, Louis van Gaal decided to substitute Jasper Cillessen for Newcastle United's Tim Krul in just under zero minute to penalties and like a magic on a hot summer day, it worked perfectly for the Dutch Coach wizard.

In their last 16 clash against the Mexican's van Gaal won the chess when he substitute his captain Robin van Persie for Klaas Jan Huntelaar. His gamble paid off in time added on when Huntelaar stepped forward to score from the spot.

It takes only a man with a big football testicles like van Gaal to bring on a goalkeeper who has never start a game in a tournament to lead a team at the cross roads something that the commentators could not explain.

Krul proved to be the secret answer when he saved two of the spot kicks to outs the combat Los Tico's who beat Greece in the round 16 on penalties with goalkeeper Keylor Navas saving Theofanis Gekas' effort.

The Netherlands will now face Argentina in the semi-finals but one thing is certain, if Lionel Messi can be defined as a football magician then it will not be wrong for one to also assume that Dutch coach Louis van Gaal knows everyone's internet password.