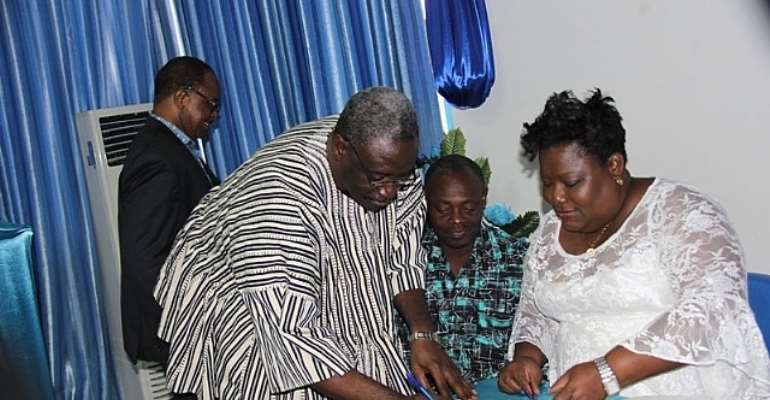 Accra, July 5, GNA - Mr Prosper Bani, Chief of Staff on Friday asked Chief Directors of the various Ministries, Departments, and Agencies (MDAs) forming the Civil Service,   to take   steps to monitor the performances of their staff,   to ensure high service delivery in the MDAs.

He said government on its parts would ensure that salaries and other logistics are provided to the Service on time, to enable staff to put in their best.

Making the call at the signing of the 2014 Chief Directors' Performance Agreement in Accra, Mr Bani said the Agreement would require work efficiency from both the Chief Directors and staff of the Service,   and so the need for Directors to work hard.

The introduction of the Performance Agreement System (PAS) in 2010 in the Civil Service, is one of the efforts designed to bring the civil service leadership into focus, and through that change the negative public perception on their service delivery.

Mr Bani also urged the Directors to take the challenge to seek for resources outside government funds, to help finance some segments of work of the Service.

Nana Agyekum   Dwamena,   Acting Head of   the Civil Service, said   performance in the civil service is a topical issue, considering the level of expectation from the public.

He said a recent document has also revealed that 'the mass of public servants at lower levels will never perform to acceptable standards, unless they are led by an elite corps of senior officers who also accept responsibility for the performance of the entire workforce under their command.'

The need for redirecting efforts to productivity and performance improvement in the Civil Service should therefore target the key decision makers, especially the Chief Directors and Directors, while intense efforts are made to focus the Service's mindsets on achieving targets within specified time frames, while ensuring stakeholder satisfaction and in a cost-effective and efficient manner, Mr Dwamena said.

He said PAS had become necessary because in the execution of duties, it was critical to measure and assess the quality and quantum of work that one churned out, to match set goals and targets in order to meet the expectations of stakeholders.

He added that the re-introduction of the PAS which was consistent with the President's agenda of creating a productive and proactive public service, would go a long way to assist chief directors to provide the necessary leadership and guidance for determining policies and objectives within the sector.

Mrs Bridget Katsriku, Chairperson of the Public Service Commission, urged the Chief Directors to help change the negative perception of the Civil Service as a corrupt and unproductive sector.

Mr Seth Tekper, Minister of Finance and Economic Planning, asked Chief Directors to take up the responsibility of ensuring that payrolls were devoid of ghost names.

He explained that it was not the role of the Controller and Accountant-General, or even the Ministry of Finance, to detect ghost names, but rather Chief Directors who work directly with staff at the various MDAs.

'Chief Directors should ensure that there is an effective human resource management in place, to help detect any malfeasance and ghost names, and not the Controller and Accountant-General,' Mr Tekper said.