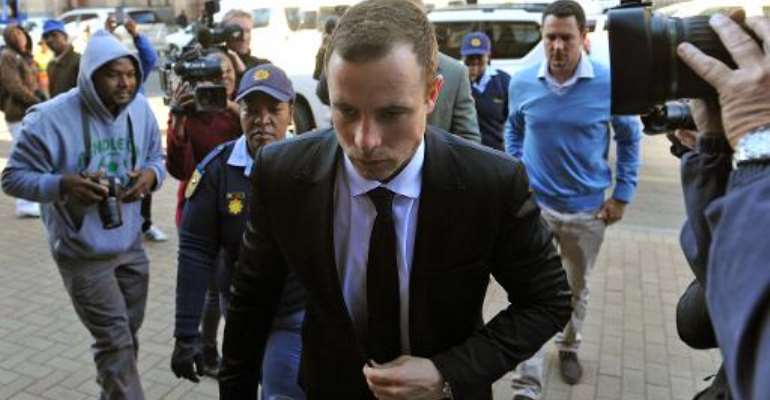 Pretoria (AFP) - South African prosecutors on Monday sought to show Oscar Pistorius's sports doctor overstated his immobility without prostheses, as a leaked video shows the star sprinter re-enacting the shooting of his girlfriend.

State prosecutor Gerrie Nel took Wayne Derman to task about his claim the athlete was mentally vulnerable and had limited mobility on his stumps.

Pistorius's defence team say both factors led the Olympian to shoot Reeva Steenkamp in the early morning hours of Valentine's Day 2013 out of fear that she was an intruder.

Nel's tough questioning comes after a haunting video of the 27-year-old star sprinter was aired by The Seven Network, an Australian television network.

In the video, Pistorius, wearing a blue tank top and tight black shorts, is walking on his bare stumps with his arm outstretched and hand clenched as if aiming a pistol.

In another clip, Pistorius walks backwards on his stumps, appearing to cast doubt on the defence claim the runner has limited mobility without wearing his prosthesis.

"Can I just ask you then was it ever demonstrated to you that Mr Pistorius was able to walk backwards on his stumps?" said Nel.

"It was never demonstrated to me," said Derman.

Nel worked to show that Pistorius wilfully moved towards the bathroom to shoot his girlfriend Reeva Steenkamp four times with a 9mm pistol.

"There was at least an option for the accused to flee, even walk out of the room, am I right?" said Nel, suggesting that Pistorius was criminally negligent by choosing to shoot instead of leaving his bedroom.

The leaked video was made by the Evidence Room, a US company that specialises in forensic animation, and lawyers for the athlete said it was commissioned by his defence team and obtained illegally by the TV station.

But the Australian television network defended its decision to run the footage Monday, insisting it was not obtained unlawfully.

"We would not have run the footage if we thought we had obtained it illegally," said Mark Llewellyn, executive producer of the Sunday Night programme.a

"The story was run in Australia only and not made available to any other territory."

Pistorius's team warned against any other media rebroadcasting the clip.

"Any reproduction of this illegally obtained material will be deemed illegal," said spokeswoman Anneliese Burgess.

During Pistorius's trial, now in its fifth month, those involved in the case have made as many headlines outside the courtroom as inside it.

On Monday Hello! magazine published an interview with Steenkamp's mother June, who said she had forgiven Pistorius.

"I don't hate Oscar," she told the magazine.

"I've forgiven him. I have to - that's my religion. But I am determined to face him and re-claim my daughter. It's important for him to know that I'm there, that Reeva's mother who gave birth to her and loved her, is there for her."

Pistorius, known as the "Blade Runner" for his prosthetic limbs, has been charged with murdering Steenkamp after a row early on the morning of February 14, 2013.

The sprinter claims he mistakenly shot the 29-year-old model and law graduate through a locked door, believing she was an intruder in his upmarket Pretoria home.

If found guilty of premeditated murder, he faces up to 25 years in jail and an abrupt end to his glittering sports career.