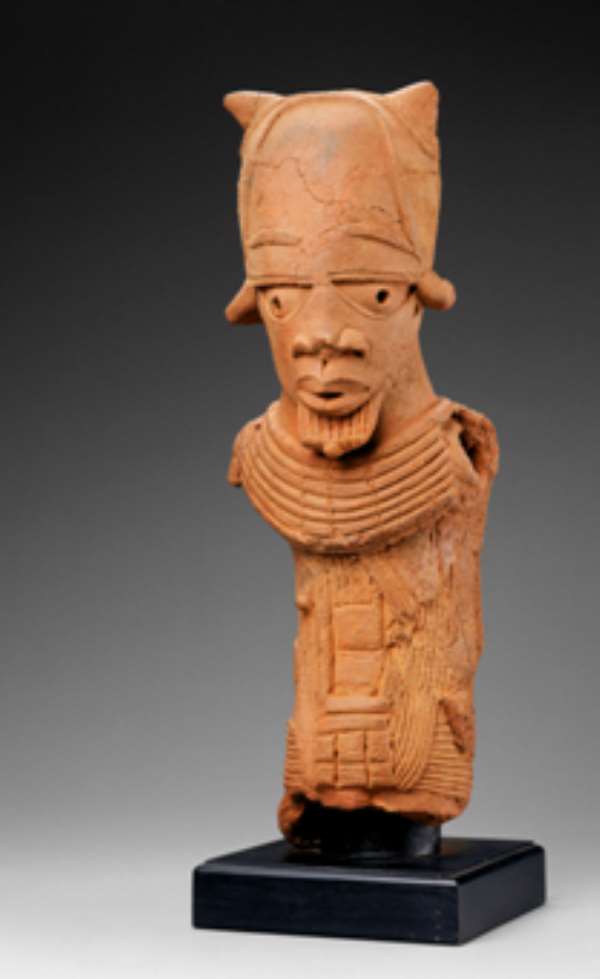 'It is indeed unfortunate that so much Nok material has been looted over time to supply the international market. Properly excavated, such pieces might have shed valuable light on the Nok culture.' Ekpo Eyo. (1)

When I read the news that the Museum of Fine Arts, Boston, was returning 8 looted antiquities to Nigeria, I could not believe my eyes or the title of the article until I read the full report and was convinced that it was genuine.(2)

I asked myself whether it was the same museum that had been trying to convince us a few months ago that it was better for Benin bronzes to be in the Boston museum where more people would see them. The curators of the museum had also tried to convince us that they had a duty to tell the history of Benin. It seemed then that the museum would never return any object once it had entered its records. (3)

Have the museum officials who a few months ago seemed to be convinced of their right to hold other peoples cultural artefacts experienced a conversion? Whatever may be the cause of the change of position and attitude regarding restitution of looted cultural artefacts, the Museum of Fine Arts must be congratulated for this change of policy or practice which seems to be on the right path. Gone from the museum's policy then are lengthy legal process and interminable arguments and counterarguments between the museum and artefact owners.

Coming a few days after the return of Benin artefacts by Mark Walker, the return of 8 artefacts by the Boston museum may incline us to think a season of 'miracles' is at hand. This is not the first time that the museum has been involved in restitution of looted artefacts. The museum has returned artefacts to France, Greece and Italy but this was done, especially in the case of Italy, under pressure of legal action and threats of other measures (4). In the case of the Nigerian artefacts, the return appears to have been voluntary and under no pressure as far as we can tell.

If we understand correctly this change, the Boston Museum of Fine Arts does not wait for an owner to claim ownership before it acts. The museum has a designated official who undertakes the examination of provenance. If the official has sufficient doubts about the legitimacy of the acquisition of an object, she makes her own enquires and informs the museum accordingly. The burden of proof is no longer on a claimant to establish ownership but for the museum to establish the legitimacy of acquisition of the artefacts.

The policy of the museum seems fairly reasonable to us but why does the museum not employ more provenance officers, considering the large amount of artefacts, 500.000, the museum holds? Although not explicitly stated in the report, it seems the museum's policy as far as African artefacts are concerned, deals only with objects that have been looted or stolen since 1970 (year of the UNESCO Convention).are to be considered. We read from the homepage of the museum, under its Acquisitions and Provenance Policy. (5)

The Museum of Fine Arts, Boston, is here following the line of defence much beloved by Western museums when confronted with African claims of restitution: They advance the 1970 UNESCO Convention as an obstacle to restitution. They set 1970 as a cut-off date for restitution claims and will not consider claims of looting or stealing of artefacts occurring before 1970 even though the convention itself does not contain any such barrier. True, the Convention, like most legal instruments, does not have a retrospective effect but it does not approve or disapprove of previous lootings nor does it prevent claimants from seeking restitution on grounds other than those provided in the convention.

So what appears at first sight to be a 'miracle', due to the unexpected return of looted artefacts from a museum that has not been very sympathetic to the idea, is in reality nothing more than a happy coincidence of many factors or a clever presentation of results that are in accordance with the declared policy of the museum and which happens to coincide with African expectations on different grounds.

The museum has not agreed to return the Benin artefacts that form the Lehman collection though the museum itself has admitted that all those artefacts were looted from Benin in the notorious invasion of 1897. (6)

Whilst congratulating the Museum of Fine Arts on returning 8 looted artefacts to Nigeria, we must remind ourselves and others that the museum follows the same line as many other western museums: they refuse to consider the issue of the return of artefacts looted in the colonial epoch. They have provided themselves with a cut off date of 1970 which conveniently happens to be a date when most African artefacts had already been looted and were lying quietly in Western museums. This factor of date must be brought to the attention of the African peoples, especially as some African officials entertain consciously or not, the illusion that Western museums are willing to discuss the restitution of artefacts looted at an earlier period.(7)

Western museums have repeatedly stated they are not willing to envisage the return of the Benin bronzes but African officials continue to act as if these artefacts were on their way home.(8)

Some have even said that Nigeria has received more than 100 artefacts back. What is not explained is that these returns, mostly looted objects intercepted by customs and police, are to be distinguished from the famous artefacts in the British Museum and other Western museums.

There is no shame in being unable to recover cultural objects looted by a powerful foreign State a century ago. But it is a dangerous tactic to entertain the illusion amongst people that we are succeeding in recovering those objects when we cannot concretely demonstrate that these looted objects have left Western museums and have now been returned to Nigeria. We do not know of a single instance where any of the famous Nigerian artefacts has left a Western museum and gone back to Nigeria. (9)

The return of the eight looted Nigerian artefacts by the Museum of Fine Arts, Boston is undoubtedly a very important step in the right direction. However, our enthusiasm for an action which a few months ago would have been considered improbable, if not impossible, should not blind us to the fact that this return involves a very, very tiny part of the thousands of looted Nigerian artefacts in the museum and in other American museums.

The Museum of Fine Arts, Boston, must return the Benin artefacts in the Lehman Collection which it received by way of donation. The museum itself has admitted that the artefacts in the collection were all looted in the nefarious British invasion of Benin in 1897. What else does one need to know that these are stolen and looted artefacts of others? Both the National Commission on Museums and Monuments and the Benin Monarchy have requested the return of these items.

.More of such returns would be expected not only from the Museum of Fine Arts, Boston but also from Western museums that have until now acted as if there were nothing wrong in holding well-known looted artefacts of others. Western museums must also contribute to the respect for the rule of law and ordinary morality. That attitude of exempting artefacts looting from the moral the commandment 'Thou shall not steal.' may not be unconnected to the increase in robberies in religious places, museums, art galleries and other institutions in the West.(10)

A museum in a city that is associated with the struggle for American Independence surely would have no difficulty in understanding the desire of other peoples to keep and hold freely their own cultural artefacts without hindrance or interference by foreign museums and other institutions.

The Museum of Fine Arts, Boston, has described in a current exhibition, Magna Carta as'the foundation for many liberties that Americans enjoy'. This principle of liberty must also apply to Africans and peoples of African descent even though; racism, slavery, colonialism and imperialism have obscured the perception of many. Liberty surely includes the right to develop our culture as we wish and with instruments and materials of our civilization.

4. K.Opoku, 'Declaration on the Importance and Value of Universal Museums: Singular Failure of an Arrogant Imperialist Project',

8. K. Opoku, 'Benin Plan of Action(2): Will this Miserable Project be the Last Word on the Looted Benin Artefacts?

ANNEX
LOCATIONS OF NIGERIAN MASTERPIECES IN USA AND EUROPE

Those interested in knowing where Nigerian masterpieces are may consult the following list compiled from indications in the last book by the great Ekpo Eyo, Shrines to Showcases: Masterpieces of Nigerian Art, 2010, Federal Ministry of Information and Communication, Abuja, We mention here only those locations mentioned in Eyo's book. http://www.modernghana.com/news/312372/1/excellence-and-erudition-ekpo-eyos-masterpieces-of.html

There are many more locations of Nigerian art in Western museums which are not mentioned here.

Returned Artefact—Terra-Cotta Head From Nigeria Dating To 500 B.C. To 200 AD

More Feature Article
ModernGhana Links
Suggestion For The Minister Of Roads And Highways
The kidnapping plot in motion: Here is your stone, ‘Prophet’ Rawlings!
Was The 'Kidnapped’ Takoradi Woman Really Pregnant?
I Am Mixed about ECO Launch
Nothing Really Insightful about CDD Post-Election Survey
Trumpism with a Biden Face: US Haitian Policy
Curse be upon the originators of Covid-19
Ghanaian retiree woman in London dies of Covid-19 under suspicious circumstances
Celebrating International Youth Day: A Focus On John Boadu Of The NPP, An Accomplished Youth Leader
TOP STORIES