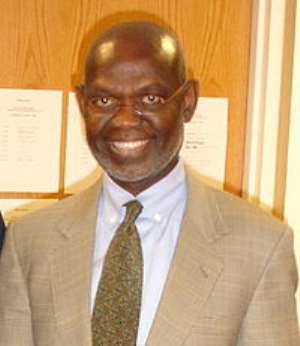 Accra, July 3, GNA - Professor Kwesi Botchwey, a leading member of the ruling National Democratic Congress (NDC), has called for cohesion among the various political parties, in order to accelerate development.

Prof   Botchwey made the call when members of the Institute of Economic Affairs (IEA) Winner-Takes-All (WTA) Advisory Committee,   paid a courtesy call on him at his office in Accra.

The visit was to seek the opinion of Prof Botchwey on whether he supports the call for the abolishing of the Winner-Takes-All system of government, as being espoused by the Committee.

He said, the winner-takes-all system of government as enshrined in the 1992 Constitution, has always led to the exclusion of the losing parties, which tend to affect the acceleration of development.

He said the situation was, however, not the same during the era of the Provisional National Defence Council, as the leadership was always looking for the best, leading to the appointment of personalities like Mr John Agyekum Kufuor and Mr Justice D.F. Annan of blessed memory, in the government.

'There is always greater desperation with the winner-takes-all system, and it is very worrying as it poses a threat to the progress of the country,' he said.

Prof Botchwey, therefore, called for the creation of a political system which would allow for the inclusion of all political parties in national development.

He also called for the protection of key institutions from political partisanship, as it affects the socio-culture, as well as diminishes the vibrancy of civil society organisations.

Archbishop Charles Palmer-Buckle, Chairman of the IEA-WTA Advisory Committee, called on the Constitutional Review Commission to slow down the pace of its review process, and listen to the opinions of the populace with regards to the winner-takes-all system, before holding its referendum on the proposed amendments.

He said, the winner-takes-all system needs to give way for a new system of government that would bring everybody on board, irrespective of one's political affiliation or the party in power.

He said, the notion that 'the devil you know is better than the angel you don't know,' is the best way not to progress in life, and it is imperative that a new system is adopted to accelerate the country's development.