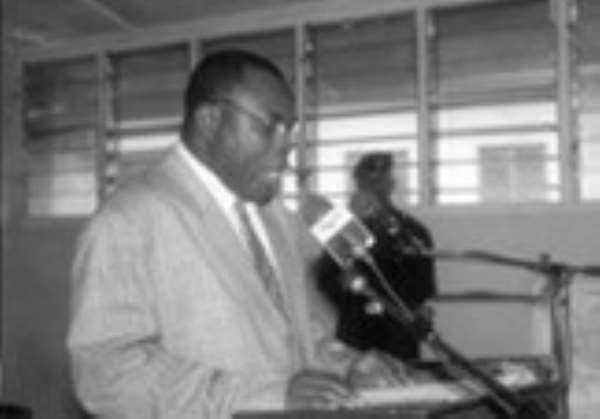 Series of information gathered by The Chronicle, coupled with tons of documentary evidence, indicate that but for the timely intervention of the Volta Regional Minister, Hon. Kwasi Owusu Yeboah, a strange disbursement of some ¢300million worth of Highly Indebted Poor Countries (HIPC) funds projects by officials of Ghana Post (GP), contrary to ministerial directives, would have deprived a large number of people in the region access to postal services in their various communities.

The 'plot', if it had gone unblocked, would definitely have drawn the region back decades in its drive to fairly expand the communication network throughout the 22 constituencies within the shortest possible time.

According to the story, as captured by the paper, as part of government desire to spread out the telecommunication network to all parts of the country, Cabinet decided last year that dilapidated postal agencies in the rural areas should be rehabilitated through funding from the HIPC relief purse. And based on that the sector minister, Dr. Albert Kan Dapaah, directed all regional ministers to select 10 agencies from their regions for rehabilitation.

The letter dated September 4, 2003 and signed by the minister stated thus: “Kindly select ten agencies out of the lot within your region to be rehabilitated this quarter.”

Attached to the letter was a list of all postal agencies in each region; and in the case of the Volta, there were 100 very deplorable agencies all begging for one form of assistance or the other. Grouped in two districts, Ho and Kpando, then came the daunting task of doing the selection.

But while the minister was consulting for expert advice on the fairest mode of selection of the 10, contract letters, dated as far back as January 30, 2004, were dispatched from GP Headquarters in Accra to the region, indicating that only five agencies would be habilitated.

The contract letters, with reference number EST/GEN.018 and signed by one Charles Asiedu, Projects Coordinator of GP, on behalf of the minister, did not explain why the region's quota had to be so abruptly slashed, neither did it state the mode of selection.

However, a close scrutiny of the list of five clearly indicates that there was everything to suspect, fear and worry about the sums allocated. For instance, while Dabala postal agency in the South Tongu district was allocated ¢10million, Botoku in the Kpando district had ¢192million.

The fantastic allocation to Botoku raised a lot of eyebrows and prompted this reporter to dig even deeper into the matter, only to find out that there is no existing postal agent at Botoku in the North Dayi constituency of the Kpando district, indicating that the whole thing might either be a hoax, or that there might be a potential diversion somewhere. In fact, the town was not listed anywhere in the files of GP and did not appear anywhere among the list of 100 known agencies in the region.

The multi-million dollar question at that stage was where that large sum of money, representing the hard earned HIPC relief fund, was going to be sunk if GP really had no existing agency at Botoku.

Interestingly, however, whatever there was to hide by GP in their strange disbursement of funds for the region, and for what purpose, could not be 'buried' any deeper, as Asiedu's letter gave him and GP away.

While the opening paragraph of his letter stated categorically that there was to be a rehabilitation work on an old postal agency at Botoku, a contradicting paragraph in the same letter gave the 'lucky' contractor, LUWA Engineering Limited of Accra, the green light to construct a brand-new post office there.

The Chronicle can say that the 'infamous deal' prompted the regional minister to block whatever the big fishes of GP might be up to.

For in a letter dated 23rd March, this year to Kan Dapaah, Yeboah contended that in the face of the fact that nearly a hundred dilapidated agencies had to be attended to, there was neither reason nor rhyme for that colossal sum to be spent on a new post office, more so when the authorities controlling the fund knew the difference between rehabilitation and construction, and opted for the former.

Yeboah, it was learnt, requested that the list of five be withdrawn because of the cloud of doubt hanging over it, and this paper can say that Kan Dapaah found merit in the issues raised, and threw the list overboard.

As at the time of filing this story, the old list has been suspended, and a new one (10 now) has been compiled to rectify the anomaly.

As part of our investigations, a senior GP official at the regional office here, who said he was glad that the right thing had now been done, hinted that it was against the company's rules to put up a new post office in a rural area that had no postal agency to show for it.

“My brother, the usual points we consider in matters of this nature are accessibility, revenue generation, catchment area, sustainability and fair distribution. The big men in Accra should have known better. I am shocked at their behaviour,” he lamented. He, however, pleaded anonymity.

But in a related development, the Member of Parliament (MP) for North Dayi, where Botoku falls, took offence, and accused the regional minister of playing politics with the funds.

On Wednesday, May 12, Hon. Akua Sena Dansua, was on air during a Joy FM Prime News, that Yeboah was interfering politically in the disbursement of HIPC money.

Hon. Dansua fumed that a project earmarked for her people had been sent away to another place, and complained that the minister's action was uncalled for.

According to the MP, because he was aspiring in his constituency, Yeboah wanted to deprive the people of Botoku of a post office by shifting the project to Apesokubi, his hometown.

But when contacted, the regional minister said his action was aimed at ensuring compliance with the provision of the funds.

“If there should be any interference from any quarter, then it should be Dansua because she appears to have used her political and social clout as an MP to influence the selection of Botoku in a manner that is inconsistent with the spirit of the disbursement procedure,” he said.

Yeboah said it was not true that he had interest in the Botoku project, saying, Apesokubi already had had a post office since 1960, and therefore did not qualify for this programme.

He reminded Dansua that she was MP for the whole constituency, and that her selection of Botoku was, as he put it, discriminatory and unfair towards her other constituents since there were already agencies at Wusuta, Fesi, Agbenorxoe, Sovie and Aveme Danyigba, all yearning to be rehabilitated.

Three years ago the New Patriotic Party (NPP) government felt Ghana should declare a HIPC status, saying there was something to gain out of it, but the opposition National Democratic Congress (NDC), criticized it and called for the country to move out of it.

Apart from schools and clinics that many rural communities have so far had as their benefits, the postal sector is now being assisted with the relief funds from HIPC. Maybe the 'war of words' between the two politicians may lead to some consensus soon as to whether the country should still remain HIPC or opt out of it.