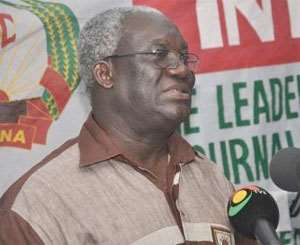 Kofi Asamoah, TUC Boss
The Trades Union Congress (TUC) has maintained its call on the government to subsidise the cost of utilities in the country, saying the current pricing formula for fuel, electricity and water punishes consumers.

A review, it said, was necessary, especially when there was no improvement in the quality of services being provided by the utility companies.

This was contained in press release issued at the end of deliberations of the General Council of the TUC in Tema.

According to the TUC, nothing was working in Ghana and accused the government of lacking solutions to the social and economic challenges facing the nation.

'Government functionaries seem to have switched into a denial mode, leading them to become overly insensitive to the plight of the ordinary Ghanaian. The insensitivity of the government is amply manifested by the recent increases in electricity and water tariffs,' it contended.

The TUC contended in its statement that it was unfair for consumers to be compelled to pay higher tariffs whenever the government, by its policies, mismanaged the exchange rate.

It noted that the continued indexation of fuel prices and electricity and water tariffs to the dollar/cedi exchange rate constituted a dollarisation of the economy by the government, adding that the effect of the prevailing economic hardships on working people was unbearable and that there was a limit to what workers could take.

It recounted that in February this year, it issued a statement that drew the government's attention to the deteriorating economic situation and the negative impact the declining economy was having on the working people of Ghana and their families, recommended some policy changes and called on the government to convene a national dialogue on the economy.

The government, it said, obliged and convened the National Economic Forum in May in what had come to be known as the Senchi Consensus, attended by prominent Ghanaians, at which far-reaching recommendations were made to address the short, medium and long-term challenges of the economy.

'Nearly two months after the forum, we are yet to witness any concrete signs of implementation of the Senchi Consensus. Given the huge and experienced government bureaucracy, it cannot be, as is claimed by some government spokespersons, that the untimely death of Mr P.V. Obeng is the cause of the delay,' it said.

Meanwhile, the economic situation, it said, was getting worse by the day, as the cedi continued to depreciate, in spite of the exchange rate controls.

'As prices keep rising, nominal incomes stagnate, leading to a drastic fall in real incomes. Workers are losing their jobs as businesses fold up. In the mining sector, nearly 3,000 workers are being sent home. Unemployment among university graduates keeps rising. The energy crisis is worsening and the taps are not flowing, as potable water continues to be rationed,' it recounted.

The National Health Insurance Scheme, one of the most important social protection schemes introduced as a safety net for the poor, it said, was under serious financial stress, adding that the scheme was unable to pay service providers.

Some hospitals, it observed, had already served notice that they were no longer going to accept NHIS cards due to non-payment of claims.

Other challenges, it said, included special schools, such as schools for the blind and the deaf, which were either closing down or about to do so, subvention not being released to the psychiatric hospital in Accra, nearly all statutory funds being in arrears and a significant number of public sector workers, including nurses and district chief executives employed by the government over a year ago not being paid.

The statement said concurrently, existing taxes had been increased and many new and in some cases strange taxes were being introduced, adding that the national debt had nearly doubled and the government continued to incur more debt.

'The government continues to withdraw subsidies and abolish long-established allowances, either to teacher trainees or nursing trainees. Yet, the budget deficit remains unacceptably high,' it stated.

It said it had taken note of the indefinite suspension of the VAT on financial services, adding that contrary to messages and assurances by the government, it was clear that the cost of banking was going to be higher for the general banking public.

For instance, it said, although the government intimated that salaries were not going to be affected, communications from the banks suggested that the cost of e-banking for workers who received e-mails and sms alerts or checked their salary transactions online was going to increase.

Interaction between the TUC and its members in the banking sector, it said, had suggested that the introduction of forex controls by the Bank of Ghana (BoG) earlier in the year and the announced 17.5 per cent VAT on some financial services had dampened banking confidence and indicated that the union had identified with and supported the intentions and actions of the Union of Industry, Commerce and Finance Workers (UNICOF) in that direction.

'The policy inconsistency exhibited by the government and in particular the Bank of Ghana in respect of the banking industry is worrying. The string of forex measures that are being implemented by the BoG in its attempt to arrest the fall of the value of the cedi have already been disastrous. The cedi continues to fall, despite, and in some cases, because of the measures the BoG is implementing,' it said.

The BoG and the government, it said, seemed to be under the illusion that the cedi's woes were borne solely out of speculation by people and businesses that held forex accounts and, therefore, if, by some political fiat, the BoG was able to deny the 'speculators' access to forex, the problem would be solved.

'We urge the government to abandon the idea of VAT on some financial services for good. Instead, it may consider raising taxes on the super profits of the banks and other financial institutions. In doing so, we expect the authorities to avoid the introduction of any measures that will only further undermine the sustainability and confidence in the banks and other financial institutions,' it advised.

'We remain ready to support the government in efforts aimed at addressing the prevailing economic and social challenges. We reiterate our commitment to support any endeavour by the President aimed at alleviating poverty and improving the social and economic situation of the working people of Ghana and their families. Time is not on our side,' it added.