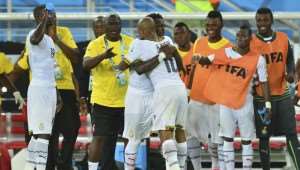 FIFA's Technical Study Group has hailed Ghana's display against Germany at the World Cup as the best match so far in the tournament in Brazil despite the Black Stars early elimination.

Ex-France and Liverpool manager Gerard Houllier, who is the most experienced member of FIFA's Technical Study Group at the tournament in Brazil, tacitly praised the tactics employed by Ghana coach Kwesi Appiah in the match against Germany.

Ghana held Germany to a 2-2 draw in a match the Black Stars dominated which has been now been described as the best game of the tournament so far.

With eight matches still to play, this World Cup is shaping up as the best in terms of the quality of the football and entertainment, says the former France and Liverpool manager Houllier.

Houllier, the most experienced member of FIFA's Technical Study Group which analyses tactics, trends and all aspects of technical play in the tournament, has seen nine World Cups and said he expected the trend of exciting, attacking football to continue.

“This has been the best one in terms of quality of football and entertainment.

“Some of the games, like the ones between Germany and Ghana, and yesterday between Belgium and the United States have been like basketball, end-to-end.

“There has been top quality drama right from the start of the group phase.

“Coaching has improved so much in the last 20 years, a lot of the rules brought in by FIFA and the International Board have really encouraged positive football and now we have a generation of outstanding strikers, top players really giving everything.

“The game is better and I expect it to continue.
“What has surprised me is the physical commitment of all the teams.

“Even in the last minute of the games in the last 16, for example the United States were giving everything and could have equalised.”

He said there was a crucial difference between the World Cup in South Africa four years ago and this one.

“The main difference is that the physical tempo of the game has been raised. This is the fastest ever tempo at a World Cup.

“The 'magic moment' in football is when one team loses the ball to the other and the transitional phase begins and here we are seeing teams stream forward, but not in a loose way, it's controlled, they are moving as a team.”

“Everything is so quick, so fast in this transitional period of play now. It is one reason why substitutes have scored a record 29 goals here.

“Those fresh legs in the later stages of the game, and greater protection from referees to the attackers is one explanation. Time and space is a rare thing, but the best attackers are exploiting that.”

THREE AT THE BACK
Other key trends to catch Houllier's eye and that of his fellow TSG member Sunday Oliseh, who played in two World Cups for Nigeria, is a fluid back three system in defence.

Oliseh, who played as a defensive midfielder for Nigeria in the 1994 and 1998 World Cups, gave a players' view of how teams are defending here.

“In the main the best teams are playing with three at the back, but they can quickly evolve into an attacking three as well, with the wide men not only overlapping into midfield but also into the attack.

“The timing of their runs has been so important, and the best teams have done it beautifully well. They are so fit now they are getting back quickly, working in combinations. It is very effective.”

Houllier agreed, adding: “This is a fact, it's not a secret. The teams are so disciplined and we have seen teams like Chile, Uruguay and the Netherlands all play like this.”

He said that although Chile were eliminated by Brazil in the last 16, they epitomised the South American style of free-flowing football, saying he noted they played with “real aggressive bite.”

Asked if the exciting tempo of this World Cup was happening largely because it was being played in Brazil with an expected freedom of expression, Houllier replied: “No I think the game will continue to improve and this World Cup vibrancy will continue all the way to Russia in 2018.”

“With eight games to go the record could well be beaten,” said Houllier, “and I would not be surprised.”