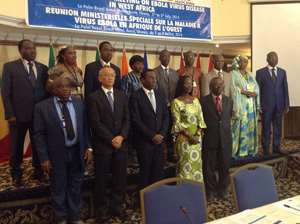 West African ministers with WHO after the opening ceremony in Accra

A total of 455 deaths have been reported so far in Guinea, Sierra Leone and Liberia since the outbreak of the Ebola virus disease, according to World Health Organisation (WHO) African Regional Director, Dr Luis Gomes Sambo.

The deaths were recorded out of 750 cases from the three countries. Health workers have been disproportionately affected in the situation, as 32 out of 60 healthcare worker cases recorded were fatal.

Dr Sambo, speaking at the Emergency Ministerial Meeting on Ebola outbreak in West Africa, expressed concern over the current trend of the epidemic, associating the spread of the virus with some cultural practices and traditional beliefs which are contrary to recommended public health preventive measures.

The extensive movement of people within and across borders has also facilitated rapid spread of the infection across and within the three countries; a situation Dr Samba said is a public health matter of grave concern.

The impact of the outbreak has been enormous in terms of loss of human lives and negative socio-economic effects.

Dr Sambo warned, 'The Ebola virus has the potential to spread outside the affected countries and beyond the region if urgent and relevant containing measures are not put in place.'

He urged ministers of the affected countries to strengthen their efforts towards containment of the outbreak, stressing on the need for the redeployment of human resources and reallocation of funds to facilitate operations in affected communities.

'To the ministers of neighbouring countries, you should strengthen disease surveillance and increase investment in epidemic preparedness. Effective measures to avert cross-border transmission of infections should be established in line with the requirements of international Health Regulation (IHR 2005),' he said.

Ms Sherry Ayittey, Minister of Health, said the active transmission of the disease is a sub-regional problem.

'We are winning the fight against infectious diseases in general,' she said, but 'those caused by viruses continue to remain a formidable threat.'

The sector minister also explained that although the problem is not the largest outbreak ever recorded, the situation in West Africa is one of the most challenging WHO and its partners have ever faced.

She said the region has a small window of opportunity to work to control the outbreak and to prevent the outbreak from spreading further.

Health ministers from West African countries are meeting in Accra to provide update on the epidemic and to share experiences from countries that have faced similar outbreaks in the past.

The two-day emergency meeting assembled by the WHO would provide the opportunity for countries in West Africa to develop a more coordinated response strategy and call for a stronger national leadership and international partnership.

The meeting's objective is to agree on a single inter-country strategy which would galvanise key actors, bring together expertise and mobilise resources for accelerated actions to combat the epidemic.

Participants would also discuss ways of preventing further epidemics and the need to undertake research to address the knowledge gap in relation to the natural history of the Ebola virus disease, the technology for treatment and more relevant preventive methods.

The Ebola Virus Disease
Ebola virus is a severe illness with a fatality rate of up to 90 percent. It is transmitted by bodily fluids and tissues of infected animals or people.

After an incubation period of two to 21 days, early symptoms include fever, weakness, muscle pain, headache and sore throat. Late-term symptoms are more serious and include vomiting, diarrhoea, impaired kidney and liver function, and sometimes both internal and external bleeding (haemorrhaging).