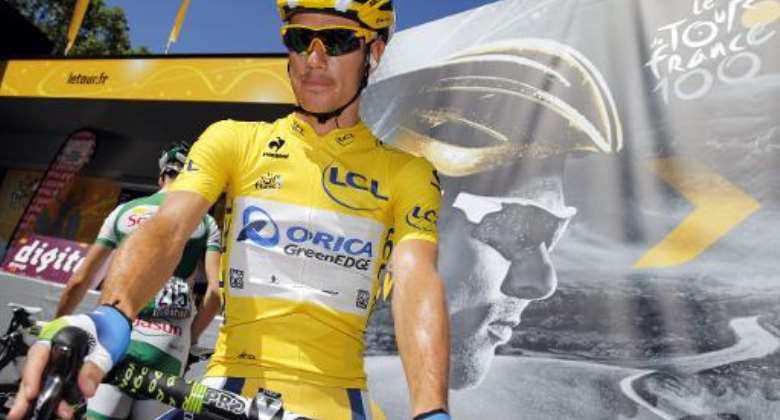 South Africa's Daryl Impey wears the overall leader's yellow jersey before the start of the eightht stage of the Tour de France on July 6, 2013. By Pascal Guyot (AFP/File)

Probenecid is a substance used to treat gout and hyperuricema but banned because it can be used as a masking agent.

Impey has denied any wrongdoing and Bannan said his team had nothing to hide, calling on his Tour de France riders to stay focused in the midst of the doping scandal.

"Obviously the guys will be affected by what's happened, because of the friendship within the team," Bannan told Australian Associated Press.

"How deep of an effect, we're really not too sure."

He said Impey, 29, initially told him of the positive A sample last week and confirmed on Tuesday that the B sample result had also come back positive.

Orica-GreenEDGE took him off their racing roster ahead of Saturday's start of this year's Tour de France while he fights to clear his name.

"It's really important that we stay focused -- we have absolutely nothing to hide," added Bannan.

"We can be proud of our short history in the sport. It's a matter of really just continuing the ethics that we stand by."

The scandal is a major blow to the image of a team that commissioned an anti-doping consultant to conduct an independent review of their operations and staff in the wake of the Lance Armstrong scandal.

Impey's positive test comes nearly a year after Orica-GreenEDGE veteran Stuart O'Grady retired and then within a few days confessed to doping once in the late 1990s.

The five other riders will be making their debut in the race -- Australians Luke Durbridge, Mathew Hayman and Michael Matthews, Belgian Jens Keukeleire and Briton Simon Yates.