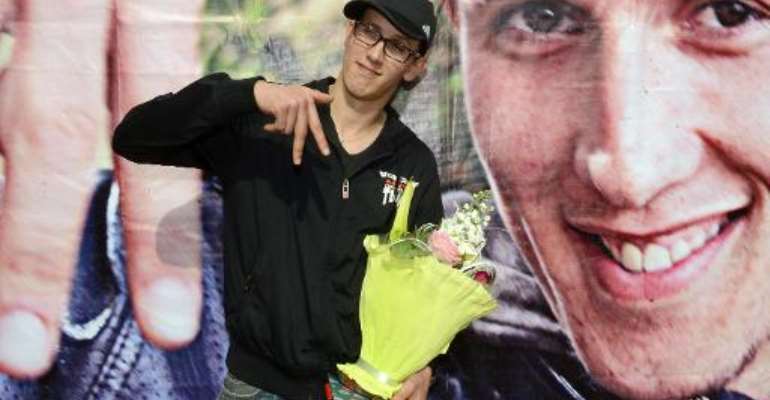 Mouad Belghawat, aka Lhaqed, a young Moroccan rapper known for his anti-monarchy lyrics, poses for a photo during a press conference after he was released from jail in Casablanca on March 29, 2013. By Fadel Senna (AFP/File)

Rabat (AFP) - Human Rights Watch warned Tuesday of political motives behind the jailing of a dissident Moroccan rapper and demanded that any appeals trial admit key evidence the judge rejected in convicting him.

Lhaqed, a voice of Morocco's February 20 protest movement who spent a year in prison for defaming the security forces, was handed a fresh four-month sentence on Tuesday for assaulting the police and public drunkenness at a football match in May.

A Casablanca court also ordered him to pay 15,000 dirhams (1,335 euros) to the two policemen he allegedly assaulted and gave him a 500-dirham fine.

The 26-year-old musician -- real name Mouad Belghawat -- insists he is innocent and says he was assaulted by a policeman.

The New York-based rights group highlighted the judge's refusal to comply with the demands of the musician's lawyers, which included summoning witnesses, the police officers who brought the charges and the doctors who signed the medical report on the alleged victims.

"This wouldn't be the first time that what looks like an unfair trial on common criminal charges has served to silence a persistent critic in Morocco," said HRW's regional director Sarah Leah Whitson.

"Any appeals trial should fairly weigh all the evidence in the case, and hear all relevant witnesses."

Despite pledges by the Moroccan authorities to strengthen the independence of the judiciary, it has increasingly come under fire from rights groups, notably for sending critics of the regime to jail after unfair trials.

Last month, the AMDH, Morocco's largest independent rights group, accused the state of "levelling false accusations of common crimes against detainees to hide the reason for their detention".

In May, nine members of the February 20 movement were give jail sentences of up to one year for violence against police during an unauthorised protest, after a mass rally in Casablanca called by Morocco's main trade unions.

Rights groups say the accused, who are provisionally free pending appeal, were arrested for chanting anti-regime slogans, but the police allege that they attacked and injured five members of the security forces.