Police Give Hope To Widow 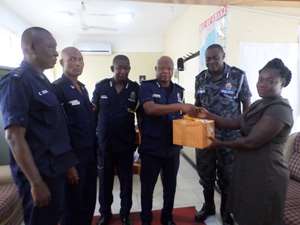 The police administration has brought smiles to the face of a 29-year-old woman, whose husband, Lance Corporal Ebenezer Obeng died in the line of duty in a road accident in 2013.

Pamela Obeng, a mother of two, has been offered a permanent employment at the Brong-Ahafo Regional Police Clinic as a civilian employee.

Pamela lost her husband, Lance Corporal Ebenezer Obeng with service number 39218 on July 8, 2013 through road accident on the Tamale-Kintampo highway while escorting a public bus.

He worked with the Rapid Deployment Force (RDF) in Sunyani.

The Inspector-General of Police (IGP) on February 12, 2014 donated an undisclosed amount of money to the lady just after the funeral of the deceased police officer.

DCOP Sakipasgo said the donation would boost the morale of police personnel.

He assured police personnel that the police administration would never forget personnel, who become incapacitated and even lose their lives in the line of duty to the nation.

He expressed his condolences to the widow and further assured her that the doors of the police administration would always be opened to her.

Pamela, for her part, thanked the police administration for the gesture and promised to work to the satisfaction of the authorities.