Ghana in an era of retrogression — Akufo-Addo 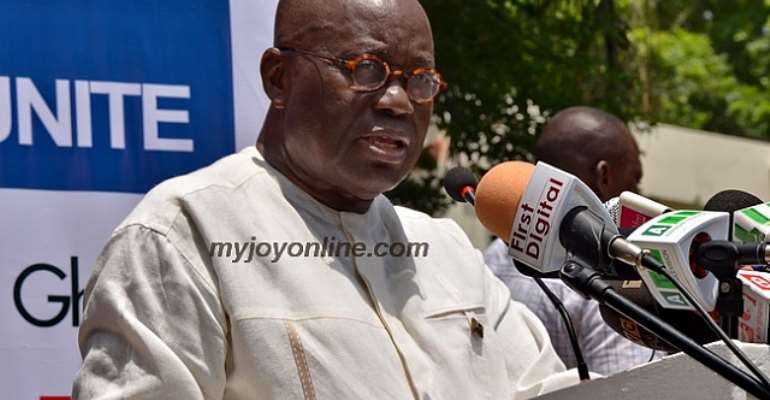 “You may look at the problems we are facing now and say we have seen all of them before. But, I have been around for some time now, and I don't remember the last time we had all these problems hitting us at the same time with such force. Ask yourself, why?” he said.

He stressed that there were “No water, no electricity, no petrol, no money, no jobs, no mercy,” and the audience added, “No World Cup victory!”

Nana Akufo-Addo, who was in London for a week's visit, told Ghanaians “it seems whatever the President touches turns into dust. This is, indeed, an era of retrogression. Everything about Ghana appears to be going backwards.”

He cited the ill-fated foreign exchange measures announced in February as a typical example. “Even when they try to fix the falling cedi, they end up making it worse. The cedi depreciation was worse in the last four months since February when the stricter rules were announced than in the previous four months.

You may ask yourself, why?”
He lamented how the government lambasted his 2012 running mate, the economist Dr Mahamudu Bawumia, “when he warned them that it would not work. He was insulted! Today, Ghana's cedi is the second worst performing currency in the world. Doing better than only the local currency of conflict-hit Ukraine! Just, ask yourself, why?”

With a chuckle, the seasoned politician added to laughter from the gathering, “Not even our favourite pastime, football, has been spared in this era of repression. Under President Kufuor, we got through the group stages. Under Mills we got to the quarterfinals. Under Mahama, we expected to, at least, match our old performances. But, we did worse in Brazil than in 2006. Ask yourself, why?”

Although he said he did not agree with the pressures the national football team put on the authorities to pay them before playing, he could see how the public sympathised with their concerns.

“I am not saying I support the way the players held the nation to ransom before our crucial match against Portugal. But, were you surprised that the Black Stars wanted cash in hand before playing? It is because nobody trusts this government to deliver on its promises.This is the government that finds nothing wrong when the law has levied taxes on people for those revenues to be paid directly in statutory funds such as the GETFund, District Assembly Common Fund and NHIS. If a government can refuse to pay money to an institution the law says it should, then how can we expect the Black Stars to expect to be paid on a word of promise from the President?” Akufo-Addo queried.

He said the announcement by the credit rating company, Moody's, last Friday was justthe latest of how the world had lost confidence in the capacity of the government to manage the economy.

Moody's downgraded Ghana from Bl to B2, describing the outlook as negative.

“What it means is that Ghana will now pay more in interest rates to borrow,” Akufo-Addo explained.