Nigeria look to future after Keshi, Yobo bow out 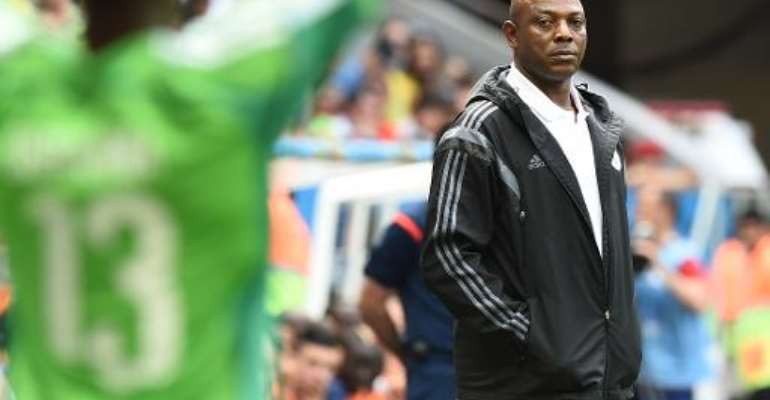 Abuja (AFP) - Nigeria were on Tuesday looking to a future without coach Stephen Keshi and captain Joseph Yobo after the African champions' World Cup campaign ended in a last 16 defeat to France.

Monday's 2-0 loss in Brasilia was Keshi's last as coach of the Super Eagles, the 52-year-old announcing that he was seeking new employment.

He has been strongly linked to the South Africa manager's position.

While Keshi, who took over Nigeria in 2011, remains firmly on the international scene his veteran skipper Yobo has announced Monday's game was his last for his country.

It was the third time the Super Eagles had failed to reach the last eight of the tournament after they were also eliminated at the same stage in the 1994, with Keshi as captain, and 1998 finals.

But Yobo said the team had given a good account of themselves in Brazil.

"We've won the Africa Nations Cup and we came here and were not disgraced," he said.

But TV pundits back home like former international Jonathan Akpoborie maintained Nigeria could have done better.

"Overall, I will say we did well, but we have reached the second round in the World Cup previously, so it's no news and not worthy of celebration," he said.

"I am disappointed that the selection of the 23 players all together contributed to the loss to France.

"I don't believe the coach had confidence in every player he took to the World Cup because there were changes he ought to have made from the start of the second half against France, but he could not because the quality on the bench was suspect."

Football expert Chika Akujobi said Nigeria should learn from this experience and lay more emphasis on the development of the game at grassroots level.

"We should know that one can only offer what he has and that's what the team did," he said.

"We must have learnt a few things from this World Cup. We now have to continue to improve on what we have. We have the raw talents, but we need to plan on how best to develop them."

The former international skipper still has a year left in his contract, but the relationship between him and his employers has not been cordial.

His exit allows another coach to lead Nigeria from September in the qualifying tournament for next year's Africa Cup of Nations in Morocco.

Another former international captain Sunday Oliseh will be an obvious choice, but it would be left to be seen if he would take up the job after he was linked with it in the past four years.

The 33-year-old Yobo won his record 100th cap against France on Monday and then called time on a 13-year sojourn with the national team.

He said the country is blessed with capable replacements for him in Chelsea defender Kenneth Omeruo and Godfrey Oboabona, who is based in Turkey.

Other players who showed promise to lead the country in the coming years are Lazio midfielder Ogenyi Onazi and Ukraine-based forward Michael Babatunde, who justified his inclusion in the first team ahead of Chelsea winger Victor Moses.

At the end of August, elections into the executive committee of the Nigeria Football Federation will be held and this is expected to set the tone for what should be expected of Nigerian football for the next four years.