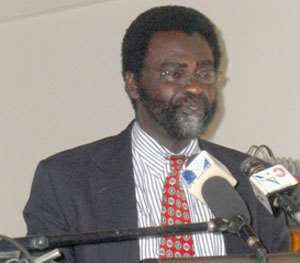 Dr Amoako Baah
A Political Science lecturer with the Kwame Nkrumah University of Science and Technology is appalled by the decision of government to fly a whopping amount of $3 million to Ghana's players in Brazil.

Dr Amoako Baah is even more embarrassed by the fact that government did not do any due diligence to know that flying such huge amount would attract taxes which would inure to the benefit of the Brazilian government.

Ghana's campaign in Brazil 2014 ended in shame with a comedy of scandals, player indiscipline, the result of which was a first round exit by the Black Stars.

Even more weird was the decision by the government  to fly an amount of $3 million to pay the appearance fees of the players.

The players threatened to boycott their final game against Portugal if their monies, $100,000 each, were not paid in cash.

President John Mahama was reported to have intervened with a promise to pay the players in cash.

With the president's approval an amount of $3 million was flown to Brazil on a chartered flight and was received by armed Brazilian police and military escort.

The arrival and dispatch of the money were shown live on a prime time Brazilian TV, an act which many critics say has brought shame on the country's image.

After receiving $100,000 each, it was apparent that the players, in line with Brazilian law, would have to pay taxes on the amount received.

17 per cent was therefore deducted from each of the $100,000 given to the players and officials before they were allowed to bring it home.

Ghana has since become a subject of ridicule.
Speaking to Joy News, Dr Amoako Baah said it was “absolutely incompetent” for government to superintend over such a scandal.

“How can you put such an amount of money in the airplane?” he questioned, only for the Brazilian government to deduct taxes from it,' he added.

“Don't we think?” he fired. “Shouldn't we know these things?” he added.

He was even more surprised that even after the president had intervened, the players still insisted on having their monies paid in cash.

“Why will the players not listen to the president?” he asked.

The lecturer added that calls for the dismissal and not reassignment of the Sports Minister and his deputy were not misplaced.

Meanwhile, President John Mahama is adamant and has defended the decision to fly the amount of money to Brazil.