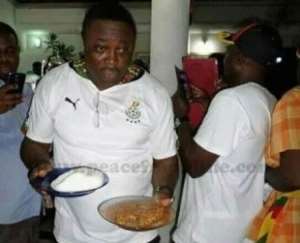 A statement issued over the weekend by the Presidency indicated that the Minister of Information and Media Relations, Mahama Ayariga, would take up Elvis Afriyie Ankrah's position as the substantive Minister of Youth and Sports, while Joseph Yammin had been moved back to the Ashanti Region as the Deputy Regional Minister, taking over from John Alexander Ackon.

Mr Ackon had been moved from the Chieftaincy Ministry to the Ashanti Region as Deputy Regional Minister but was yet to report at post; and suddenly he was moved to the Gender and Social Protection Ministry as one of the deputies, in the typical presidential indecision that had characterised the Mahama administration.

There had been a public outcry over the dismissal of Mr Afriyie-Ankrah, resulting from the poor handling of the Black Stars' participation in the tournament including the issue of money.

Joseph Yammin
In the case of Joseph Yammin, he was said to have caused government an embarrassment over the interviews he granted to the media regarding the selection of supporters as well as the hiring of a flight to send the $3million cash to the Stars as their appearance fee, which later became a huge embarrassment to the country as a whole.

Two weeks ago, media outlets in the country aired a voice recording, purported to be that of Joseph Yammin, stating categorically that the Mahama-led National Democratic Congress (NDC) would be flying its sympathisers to Brazil as the main supporters of the Ghana Black Stars during the ongoing World Cup tournament.

The exposÃ© drew widespread public outrage, with the general public condemning the NDC government for 'politicising' football and calling for the Deputy Minister's head.

Not long afterwards, when the Black Stars' camp was engulfed in confusion and infighting over unpaid fees, Joseph Yammin again sparked a controversy by announcing that the government was going to physically airlift the needed $3million cash to Brazil.

Critics are certain the President's latest Ministerial reshuffle was necessitated by the 'embarrassment' caused the Ministry of Youth and Sports and allegations of financial impropriety by the whole football administration that went to Brazil to witness the global tournament.

The President had hinted that a probe would be instituted into the fiasco.

Disappointment
However, in a move contrary to the general expectations of the public, President Mahama moved Elvis Afriyie-Ankrah to the Presidency as a Minister of State.

Critics had expected an outright sacking of the Sports Minister, following the less-than-dignifying news emanating from the Ghanaian camp in Brazil.

Elvis Afriyie Ankrah was the manager of the Mahama 2012 Campaign where Ghana incurred a budget deficit of GH¢8.7billion as a result of over-spending by the government in the election year.

The embattled minister had hinted that he was retiring from active politics after the 2016 election, after ensuring the re-election of Mahama.

Meanwhile, Joseph Yammin has thanked the President for not sacking him.

On Saturday, he took to social media, Facebook, to thank the President profusely. 'One year ago, I found mercy in the sight of the President and he appointed me Deputy Minister for Youth and Sports. Today, I am being moved back to my root as Deputy Ashanti Regional Minister. What else but to say, I'm grateful…'

Until his appointment, Hon Yammin was the Ashanti regional secretary of the NDC.

More Shake Up
Following closely on the heels of the reshuffle at the Sports Ministry, President Mahama also made changes in other ministries.

'The President, as part of ongoing changes in his administration, has also designated Fifi Fiavi Kwetey (MP), a Minister of State at the Presidency as Minister for Food and Agriculture, taking over from Kofi Humado, who has allegedly been implicated in the GYEEDA scandal.

Deputy Minister of Youth and Sports Joseph Yammin moves to the Ashanti Region to take over from Joseph Alexander Ackon who has been reassigned to the Ministry of Gender, Children and Social Protection as the second Deputy,' a statement from the Presidency read.

Weak Decision
President Mahama's swift move to redeem his government's image following the Brazil fiasco has been described as weak.

'President Mahama acts swiftly to change the ministers of Sports. But it is a very very very weak decision. Those two ministers should be sacked! President Mahama must also apologise to Ghanaians for allowing $3m to be flown against all forex rules and disgracing Ghana in the process. The GFA mafia from the President to the door catcher must resign now now and Coach Appiah must leave immediately for further professional training,' stated Franklin Cudjoe, the Executive Director of think-thank, IMANI.

Pressure group, Alliance for Accountable Governance (AFAG), has described as 'window shopping' the recent reshuffle by the President.

Speaking to Citi News over the weekend , the Director of Operations for AFAG, Abu Ramadan said the President must let Elvis Afriyie Ankrah account for every penny spent in Brazil before taking his new post.

'What business has Elvis Afriyie Ankrah got doing with the President that the President can't let him leave government?' Mr. Ramadan charged.

Kweku Baako Unhappy
Editor-in-Chief of the New Crusading Guide newspaper, Malik Kweku Baako Jnr is also incensed by the decision of the President to reassign the Sports Minister and his Deputy for superintending over what he called an “unmitigated disaster” in Brazil.

While admitting that politics sometimes gave room for Presidents to massage the egos of non-performing ministers with a reassignment, the editor said given the “public anger” that came with Ghana's early exit, it was required that Afriyie Ankrah and Yammin “should have been made to go home and rest.”

On Joy FM and MultiTV Newsfile programme last Saturday, he said the reassignment of the two was an admission by the President that the minister and his deputy had failed regarding the assignment given to them in Brazil.

“We must locate the lines of responsibility for the huge mess and unmitigated disaster,” he stated, adding that sanctions must be applied.

A day before Ghana's game against Portugal on Thursday, the ministry again facilitated the flight of some 75 supporters including Ayittey Powers and Kojo Adu-Asare, a former Adenta MP, from Ghana to Brazil and that too got Baako Jnr incensed.

“That is crazy. Flying supporters to Brazil on Wednesday to watch a match on Thursday?'  Kweku Baako burst out, adding that they did not even watch the match.

The newspaper editor was also embarrassed by the decision of government to fly an amount of over $3million to Brazil to satisfy the demands of the players.

He was even angrier with the deputy minister who decided to announce to the world that an amount of $3 million was being flown from Ghana to Brazil to pay the players.

“That was indiscreet,” he noted.
“A fair amount of the blame should be heaped on the President,” he noted, saying the mere fact that the presidential jet was used was ample testimony that the President gave his blessings for the monies to be flown which was in clear violation of Ghana's laws.

PPA Scandal: All Sole-Sourced Contracts Should Be Halted, Pr...
24 minutes ago