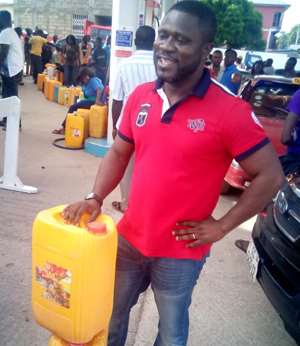 Kwawdo Baah Agyemang
It was an interesting sight to behold when a Member of Parliament was seen struggling to get fuel for his vehicle over the weekend.

The MP for Asante Akim North, Kwadwo Baah-Agyemang was spotted at an 'Onion oil' fuel station at Darkuman around 4:30pm Saturday with two 25-litre yellow gallons christened 'Mahama Buta' in hand trying to get fuel for his vehicle.

Apparently, he had been combing the whole of Accra since 5:00am that day in search of fuel without success before he got to the Darkuman fuel station.

Before he arrived at the place, a long queue of vehicles and gallons had formed at the fuel station with some drivers having to sleep there overnight.

He therefore had no option but to join the long-winding queue.

Hon Kwadwo Baah Agyemang, who used to work in the media, initially shied away from the camera when our reporter spotted him and took shots.

But after a few minutes, he opened up and expressed extreme disappointment at the state of affairs in the country.

'It's unfortunate that we have allowed this country to sink back into the 80s when one could not have access to basic amenities', he said, almost in tears.

Due to the fuel crisis, the young MP said he could not attend to pressing issues in his constituency in the Ashanti Region and wondered how long Ghanaians had to go through the hellish situation.

Fortunately for him, someone spotted him in the crowd and shouted 'honourable'.

This was what saved him from staying in the queue for long, since he was given some 'special' treatment by being made to buy the fuel before his turn.

The situation was even worse yesterday despite assurances from the government that enough fuel had been pumped into the system.

Motorists were seen in long queues in Tema, Ashaiman, Accra and other cities in search of petrol.

In their desperation, some drivers were seen buying fuel twice the price since they had no option.

Some expressed disappointment in the Mahama-led administration, saying everything had become messy in the country.

Action
In the midst of the hardship, the Ministry of Information and Media Relations says enough petrol has been supplied to the various oil-marketing companies and are available at the service stations.

Three million litres of the product was supplied on Saturday, with another four  million litres to be released on Sunday, Felix Kwakye Ofosu, a Deputy Minister of Information and Media Relations, said in a statement issued in Accra.

A total of 50 million litres of the product will be pumped into the system in the next 10 days to ease the shortage of fuel nationwide.

The statement said the Ministry of Energy and Petroleum and National Petroleum Authority would continue to dispatch products everyday until the situation stabilises.

Reports say government has requested for additional supplies from neigbouring Togo and that 50 tankers were dispatched from that country to Ghana by the close of today to ease the shortfall in supply.

Some have also made it a thriving business, buying and selling the product in jerry cans.