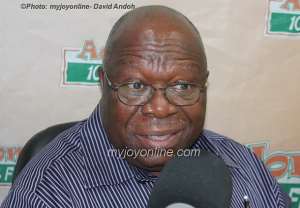 An aspirant for the position of national chairman of the National Democratic Congress, Mr Daniel Abodakpi, says he is not surprised at Nana Addo Dankwa Akufo-Addo's denial of claims the aspirant made to the effect that he (Nana Akufo-Addo) advised former President John Agyekum Kufuor not to prosecute him.

Days after declaring his bid to contest the position, Mr Abodakpi, a former minister of Trade and Industry, alleged that former President Agyekum Kufuor masterminded and orchestrated his prosecution.

Mr Abodakpi received a 10-year jail term in February 2007 for wilfully causing financial loss to the state following a trial that commenced in 2002.

He alleged that President Kufuor called for the docket and gave an order for his prosecution against the advice of the then Attorney General and Minister of Justice, Nana Akufo-Addo.

Nana Akufo-Addo has denied the claims made by Mr Abodakpi and has stated that he did not inform Mr Abodakpi during his trial that President Kufuor had called for his docket and ordered for him to be prosecuted.

Reacting to the response of Nana Akufo-Addo, Mr Abodakpi said: “Firstly, I am not surprised at Nana Akufo-Addo's denial of my statements. In fact, I did not expect him to publicly act in a way that would injure the reputation of his former boss and a leader of their party.”

Mr Abodakpi, in his press statement, also insisted that the information was provided by Nana Akufo-Addo during a verbal interaction. He added: “Therefore, I find it strange that Nana Akufo-Addo would today deny the facts. He surely must be doing so for political expediency.”

“In my interactions with him at that time, I thought I was dealing with a man of conscience who would stand up for the truth. If today, he is running away from the truth, I leave him to his conscience,” he stated.

According to Mr Abodakpi, he did not disclose those statements for political gains but rather to draw the attention of Ghanaians to what he described as “ills in our society.”

He concluded by stating that “I have put all these behind me and moving on to ensure that we do not move our democracy back into such dark days.”