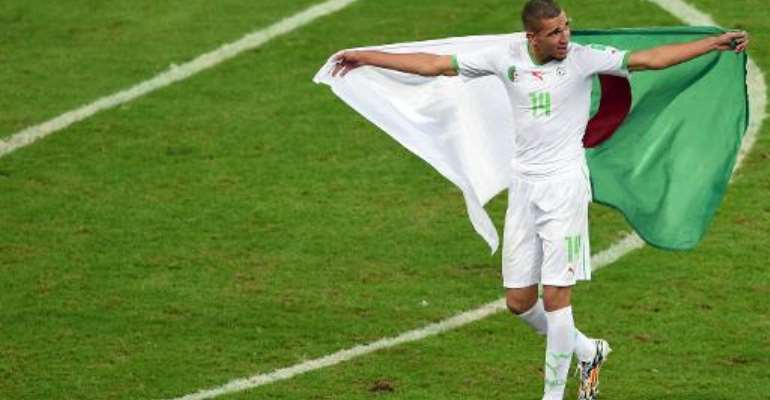 Algeria's midfielder Nabil Bentaleb celebrates his team's victory after a Group H football match at The Baixada Arena in Curitiba on June 26, 2014. By Pedro Ugarte (AFP/File)

Monday's match is a chance to right the wrongs of 32 years ago, when West Germany and Austria were suspected of conniving in a group stage result which knocked Algeria out.

With Algeria beating West Germany 2-1 earlier in that competition, the sense of injustice is strong. But players said they weren't motivated by an event dubbed the "Shame of Gijon".

"To be honest, for me I was not born then. For me, this is the past," said 19-year-old Bentaleb, who plays for English Premier League club Tottenham Hotspur.

"We have to make our own history and we have to write our own page. Now it's a new story."

Coach Vahid Halilhodzic earlier said Algeria had spoken at length about 1982 after they made it to the knock-out stages for the first time by finishing second in Group H.

But his assistant Abdelhafid Tasfaout said the team now preferred to focus on next week's game, which is shaping as the biggest in Algeria's history.

"We're talking about 30 years ago, you know. We don't want to look backwards, only forwards," he told reporters at their training base in Sorocaba, near Sao Paulo.

"That time we won the match (against Germany) but we didn't get out of the first stage, and Germany got to the World Cup final in 1982 (they lost 3-1 to Italy).

"So I think the most important thing for us is to play a great match. I think that the German players will remember the loss of 1982 and this point is positive for us.

"But we will approach this great German team with all respect."

Midfielder Hassan Yebda said: "We don't think about (1982). We'll play the game and see what happens."

Although Algeria are playing down the incident, it will be prominent in the minds of their fans at home whose raucous celebrations ended with two dead in car accidents.

"You can see in videos on the web, they're just going crazy," Bentaleb said.

And the celebrations will be even bigger if Algeria can shock Germany, ranked second in the world, in Porto Alegre.

But Algeria, who lost to Belgium but then beat South Korea 4-2 and held Russia 1-1 to go through, are aware of the size of the task ahead.

"I think after these three games we are a little bit confident but we know that Germany are a big, big team so it will be very difficult for us," Bentaleb said.

"They have so many players who play in big clubs. We're going to try and after, we'll see."