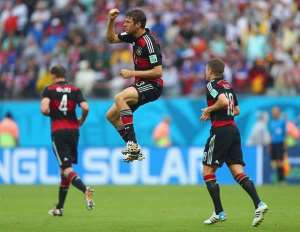 Muller, 24, has already struck four times in Brazil to be alongside Neymar and Lionel Messi atop the golden boot standings.

The Bayern Munich star claimed the golden boot at the 2010 World Cup and Low was impressed by the condition Muller was in ahead of the 2014 tournament.

Low, whose team face Algeria in the round of 16 on Monday, believes Muller is difficult for opponents to handle.

"Back in the pre-tournament phase it was clear he's in unbelievably good physical and mental shape," Low said.

"All our opponents find him hard to handle because his runs are very clever and he keeps popping up in the box.

"He's been in great form for weeks now, and with him I have the feeling the moves and runs come easily to him."